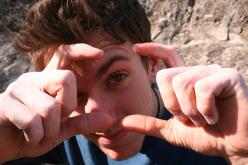 At Montsant in Spain the Italian climber Stefano Ghisolfi has onsighted two 8b+, Falconeti and L-mens.

Spain, not only for the Italian triad Gabriele Moroni, Silvio Reffo and Jacopo Larcher, but also for another highly talented youngster Stefano Ghisolfi who has managed to double his takings: At Margalef he sent his first 8b on-sight, the route Photo-shot, while at Montsant he upped the ante once again by onsighting two 8b+, Falconeti and L-mens.

While the route at Margalef is bouldery and only 15m high, the Montsant lines are true vertical journeys, over 40m high. It's worth noting that Falconeti and L-mens were separated by a mere one-hour rest! This obviously bodes well for the next competition season and the 19-year-old will now begin training for this seriously, in the hope that he can improve on his bronze medal won at Xining in China last year.