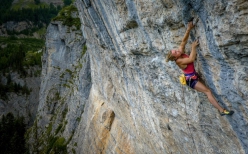 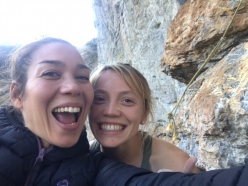 Tini Tscharntke and Solveig Korherr celebrating after the redpoint of La cabane au Canada 9a at Rawyl in Switzerland, August 2021
Photo by Jon Shen 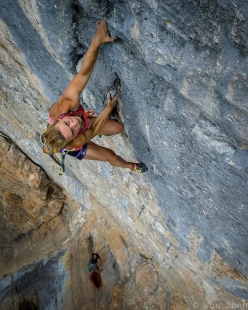 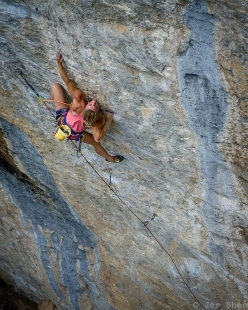 Germany's Solveig Korherr has repeated La cabane au Canada at Rawyl in Switzerland and, in doing so, has climbed 9a completing what she described as "a longterm dream of mine."

The 23-year-old redpointed the route on 23 August 2021 having previously climbed three 8c+, Southern Smoke Direct and Lucifer at Red River Gorge in November 2019, and La cabane au Paradis at Rawly in August 2020. The latter shares the lower section of La cabane au Canada and it was then that she laid the groundwork for her redpoint of the harder exit this summer.

New beta and a dedicated training cycle proved key to success on 23 August. On her Instagram account she stated "The difference I felt was almost insane - being able to recover much better in the lower part and finding a new beta for the upper crux. I was totally surprised that the tiny intermediate I used for the big move I could now lock off and reach the next hold in a much more static and safe way. That gave me a lot of confidence and I knew with a good mindest it’s totally in my ability and in the end, I think this route couldn’t have fit me better!"

Cabane au Canada has seen two previous female ascents, by Julia Chanourdie and Katherine Choong in August 2018, and was famously onsighted in July 2013 by Adam Ondra - his first of this grade and at the time only the world's second after Alexander Megos' March 2013 flawless ascent of Estado Critico at Siurana in Spain.