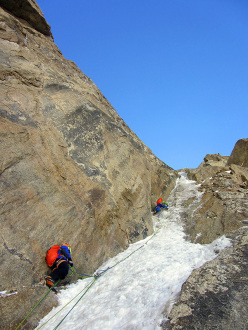 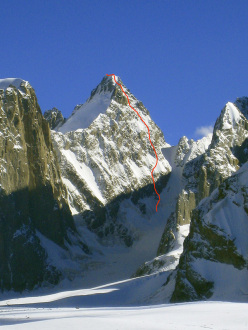 Kyzyl Asker 2015: the route White Walker on the NW face of Panfilovski Division, climbed on 12/09/2015 by Miha Hauptman and Uroš Stanonik
Photo by 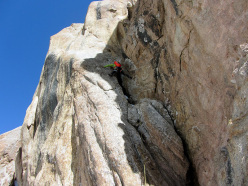 Kyzyl Asker 2015: Anže Jerše climbing rock on Take a walk on the wild side, SE face Pik Gronky
Photo by 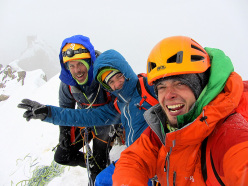 The trip report by Miha Hauptman who, together with Matjaž Cotar, Anže Jerše and Uroš Stanonik travelled to the Kyzyl Asker glacier (Western Kokshaal Too range) in Kyrgyzstan and climbed a flurry of probable new routes.

The journey took us from Ljubljana through Istanbul, before we landed in Bishkek, the capital of Kyrgyzstan. The next few days were spent wandering about town and shopping for food. Already in Ljubljana one of our backpacks decided not to board the plane with us, but instead went on its own adventure. After three days Turkish Airlines still didn’t have a clue where it was. We were left with no other option but to buy the missing gear and head on. It took us two days driving across half of Kyrgyzstan with an old Russian army van and five days transporting our gear on foot before we established our base camp at the foot of Kyzyl Asker glacier.

Pik Carnovsky
A few days after arriving in base camp Anže, Uroš and I went on a reconnaissance trip. We set off on the east fork of the glacier in perfect weather. But, as was confirmed during the duration of our stay, the weather here just doesn’t want to play ball. By the time we reached the icefall between Pik Gronky and Pik Vernyi it was snowing already. Still we continued towards a nice ice line we had spotted on the West Face of Pik Carnovsky. But the weather meant business, and by the time we arrived under our chosen line, we were left with no other options but to deposit our gear and descend. Two days later we tried again, but this time we bivied under Pik Gronky. The route required nine hours of difficult and often - because of bad conditions - dangerous climbing that just went on and on. Not exactly a warm-up route we were hoping for. We descended the route by Abalakov threads and rock horns. The next day we returned to basecamp determined to shift our activity to ridges, as the snow and ice conditions were very bad.

Ridge crossing of Pik Beggar and Pik Ecstasy
To aid in our acclimatisation efforts we started up a ridge immediately east of base camp. It extended over two minor summits, Pik Beggar, Pik Ecstasy, Pik Yurnos, Pik Gronky, Pik Carnovsky and Pik Zuckermann. Once again the good weather forecast took a turn for the worst, so we set up our tents between Pik Ecstasy and Pik Yurnos. Because of continuing bad weather in the morning, we descended directly towards the east fork of Kyzyl Asker glacier, having achieved our goal of spending the night at almost 5000m.

Kyzyl Asker west shoulder
After a few days of bad weather the forecast for the next few days looked promising. Although we had learnt not to trust the forecast too much, we packed up four days worth of food and started towards the west ridge of Kyzyl Asker. The hike up the glacier took a lot longer than anticipated. A heavily crevassed area at mid-height and deep fresh snow higher up forced us to make camp at around 5000 meters, although our goal for the day was a col at the beginning of the west shoulder of Kyzyl Asker. The next day we continued up deep snow towards the saddle. We soon realized that there was too much fresh snow and we were way too slow to make it to the top of Kyzyl Asker. We left our backpacks below the col and continued towards the unclimbed Kyzyl Asker west shoulder at 5632 m. We reach it via its west ridge and returned to sleep at the same place as the night before. The next day we returned to base camp.

Panfilovski Division and Pik Gronky
Having just enough time left to attempt another climb we split up into two teams. We'd all had enough of heavy backpacks full of bivy gear and opted instead for a lightweight approach on more or less day climbs. Uroš and I left at eleven o’clock in the evening and spent the whole night approaching the NW face of Panfilovski Division. As dawn broke we see the horror of seracs on the eastern side of Kyzyl Asker immediately above us, so we quickly started climbing to get out of their way. Across the lower rock barrier we found steep ice, which brought us to the first snowfield. We crossed a little right, below a broken pillar. And then the surprise. Up till now, during our expedition we had only encountered unconsolidated snow, but here we had the whole wall of perfect, concrete hard neve. You could hear the squeaking of tools half a pitch away.

Although it looked like this might be the first time the weather was nice throughout the climb, a snow flurry snuck in in the afternoon. We reached the top half an hour before sunset with just enough time to check out our line of descent, before we were engulfed in clouds. We descended down the NE slope towards the col between Zuccerman and Vernyi. Tiredness increased with every hour, concentration dropped inversely. We got lost above some seracs left of the col, and had to double back. It was the time of new moon, so it was pitch black. After what seemed like an eternity we reached the known part of the glacier, above the icefall between Vernyi and Gronky. Immediately though we were completely lost. We’d been on the go for over 24 hours and awake since the morning before we left base camp. A lot of snow had melted since the last time we were there, so everything looked completely different. We even considered the option that we are in the wrong valley or that some sort of a natural disaster had happened that had completely changed the landscape. We finally got our dysfunctional brains under relative control and continued. A nice four hour walk full of hallucinations brought us back to base camp.

The same day that we were climbing, Anže and Matjaž climbed a line on the SW face of Pik Gronky. Their route followed an obvious couloir interspersed with ice falls and required a few detours on rock. They approached, climbed the route and descended back to base camp in around 14 hours.

These two climbs concluded our 28 day isolation under Kyzyl Asker. During the next few days we moved our gear to the nearest “road” where we were picked up and driven back to civilisation.

I would like to thank everybody who made our expedition possible, especially: Salomon, Suunto, PZS, Maja Hauptman for daily weather reports