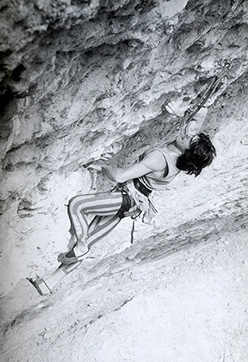 Sandro Neri in a historic photo dating back to 1987: climbing Tucson 8a+ at Erto, Italy.
Photo by archivio Rocciaviva

After 10 years of trying the Italian climber Sandro Neri has managed to repeat Emicrania 8b at Ceresera (Belluno).

If someone asks themselves why we've published this news, they'd probably best read no further. If on the other hand they believe, like us, that grades aren't the be-all and end-all and that not only 9a's are newsworthy, then applaud Sandro Neri. But before doing so, it's worth finding out a bit more about the man.

Sandro Neri is a gym teacher from Italy's northern Belluno region and one of those who, together with Iccio Dall'Omo and Gigi dal Pozzo, invented Erto. Following the inspiration of Mauro Corona, the local who discovered the crag, during the mid 1980's this revolutionary and slightly crazy young group of climbers explored climbing beyond the overhanging barriers to give birth to Erto which soon became a reference point for world sport climbing.

The young gang was called "the Erto zoo kids" - no prizes for guessing why. And now one of them, after ten years of trying, has managed to repeat a route called Emicrania, first ascended in 1997 by Massimo Manarin and located at a crag called Ceresera, another little gem hidden in the Piave valley between Feltre and Belluno. After reading the short text Sandro had sent us, we didn't have the slightest of doubts. To tell the truth, we didn't even look at the (impressive) grade of the route. This is newsworthy we said to ourselves. Just like when, years back, he redpointed the "legendary" Sogni di Gloria at Erto. Both moments talk about the same passion and strength. That of a climbing which is without headaches and ageless, which Sandro Neri has experienced and which he continues to pass on to the younger generations, to promote the growth of the sport climbing movement.

A 10 YEAR HEADACHE by Sandro Neri
I'm 46, I've been climbing for 30 years and for the last 10 I've attempted to redpoint Emicrania at Cesera. Fortunately I've also had other things to do during this decade, apart from attempting this splendid route over and over again. It transformed into a real ehadache: as soon as I got close to sending it, the summer heat arrived with a vengeance (prohibitively hot even at Ceresera if you're at your physical limit), or the storms arrived, rending Emicrania just as impossible as the crux section gets wet immediately.

To climb the route I had to reconcile cold temperatures (circa 5°C), dry weather, great form and millimetre knowledge of the route. It may seem impossible, but during these 10 years I've always discovered a new detail, otherwise I would never have withstood the boredom of such a long and dark tunnel. The switch flicked and the light finally turned on on Saturday 17 October when I discovered a new sequence to the final section which had always taxed me. I pulled the ropes and set off, angry, as if I was on a new route... happy about that new move, that final small detail which rekindled my motivation. It's because of this that I reached the chain in one go, with immense joy, finally free!

I would like to offer a word of advice to young climbers who often enter the tunnel of super-redpointing routes: vary, change, find other stimuli, both in life and the multicoloured kaleidoscope of this fantastic vertical world. And when you feel good, return to kill the "usual" project. Always search for new details which render the old project something new. I'd like to thank above all the youngsters out there, those who I took out climbing, because now you're the ones who take me out there... having fun and training on boulder problems and on fantastic trips to Ceuse, Kalymnos and Zillertal. These all alleviated my 10 year headache. Thanks!