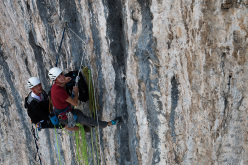 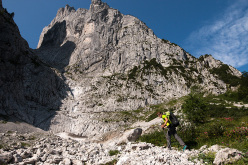 German climber Roland Hemetzberger has made the first free ascent of his new 8c multi-pitch Delirium on the Fleischbank sector of the Wilder Kaiser.

While making the first free ascent of the Scheffler - Siegert route on the Wilder Kaiser in Austria in summer 2013, Roland Hemetzberger noticed a "super steep, completely blank section" of untouched rock just to the right. The German immediately got to work and, climbing ground-up, established the lower section before winter set in.

Last summer he and his friends completed the 10-pitch line to the summit but attempting the redpoint proved impossible due to prohibitive conditions. Making the most of one of the hottest and driest summers on record he spent four days discovering the right sequences, before making the first free ascent of Delirium in mid-July.

"It was a great adventure because after the four overhanging pitches the line changes to alpine terrain and you have to find your way through another 4 clean pitches in an awesome setting." explained Hemetzberger, adding "We started 10:00 am and came down at 10:30 pm. A day I will never forget"