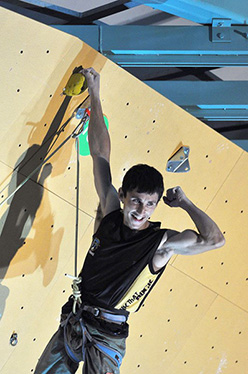 Unhappy with his result in the recent Lead World Cup in Boulder, Colorado - where he placed 8th - Ramon Julien Puigblanque travelled to nearby Rifle where he managed to on-sight his first ever 8c+, "The crew".

In doing so the Spaniard has obviously joined the extremely exclusive list of climbers capable of such a momentous feat, after Patxi Usobiaga in 2007 (with Bizi euskara at Etxauri which happened to also be the first ascent of this route) and Adam Ondra during his devastating Spanish rock trip earlier this year. An achievement like this had been on the cards for a while and now the reigning World Champion can rightly state: Mission accomplished.

10.03.2011
Adam Ondra, the 8c+ on-sight interview!
An exclusive interview with Adam Ondra from the Czech Republic after his outstanding 8c+ on-sights in Spain, including Bizi euskaraz 8c+ at Etxauri.