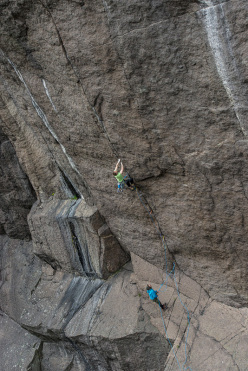 Erik Massih reports about the first free ascent of Ronny Medelsvensson (Scandinavian grade 9 / French 8b) at Profilveggen, Jøssingfjord, Norway, carried out in July 2014 together with Crister Jansson.

In July Crister Jansson and I added a new free climb to the majestic Profilveggen (the Profile Wall) in Jøssingfjord, Rogaland, by climbing the Heksenatt route without aid. I first spotted and tried the line together with Oskar Alexandersson back in 2011 when we were on an exploratory trip in the region, looking for good lines and inspiration.

Profilveggen is a huge overhanging crag, 120 m at it’s highest, riddled with cracks just waiting to be free climbed. At the time Profilveggen hosted a dozen of aid routes in addition to Leo Houlding’s and Neil Gresham’s free route Fire Fox, Scandinavian 8/8+ (7c). Oskar and I immediately set our eyes on a clean splitter up on the left side of the wall, mainly because it looked so feasible. The route had, just as most of the lines on the wall, been climbed as an aid route in the 90’s. We played stone, scissors and paper about the on-sight. Oskar won and I watched with disappointment as he taped up and racked on. I was convinced he would send first go. Oskar probably came no more than three or four moves up the crack before he grabbed the cam and yelled for me to take. The flaring crack maybe wasn’t so easy after all. After pretty much aiding up the route and lowering off we realized how steep the wall actually is. This fired up my inspiration, what a route! What a wall! Why weren’t people climbing here? The wall was not kept secret or anything. We gave the route a few tries but were just barely able to link a few sections here and there and so we left Jøssingfjord filled with motivation. I was convinced the wall would earn it’s reputation in the years to come.

Sometime later I showed Nicolas Favresse a couple of pictures of the wall. He swallowed the bait and to make a long story short, he showed us that the future is now. Nico was visionary enough to choose an amazing line, Polakkruta, up the middle of the face, first climbed with aid by Trym Atle Saeland and Olav Båsen, Nico’s efforts at linking these cracks will be remembered in the history books as The Recovery Drink. Daniel Jung also made a contribution to the wall: with a sideways dyno he solved the problem of connecting the two cracks in the first pitch of Rockin’ in the free world, all the way to the beginning of a beautiful dihedral. Linking these stunning pitches will likely result in a future classic.

I also showed the wall to my good friend Christer Jansson, a long time climbing partner. Christer knows a good line when he sees one and was hooked immediately. The two of us spent a few days on it, spread out over a long period of time but we soon realized that to send we would need to follow Nico’s approach and focus a bit more. So after a season wasted on recovering from a bike accident and the subsequent surgery we returned to Jøssingfjord in June. This time we avoided being distracted by the other possibilities in the region and instead focused our efforts on our project. After a week of working the route, mixed with fishing and woodcarving we got close to success, but not quite close enough and had to go home for work and family obligations. My wife then suggested we could change our summer road trip plans and spend some time in Jøssingfjord. Immediately, before she had time to change her mind, I called Christer to see if we could synchronize a couple of days in the area.

After spending some time in Flatanger we were finally back under the Profile wall, this time with our families. And this time we sent! Seeing Christer pass the crux was a great relief and filled me with happiness, I knew that the project was in the bag. During this process our efforts had grown together and we experienced a unity that I’ve previously only experienced on bigger routes in the mountains. Our progression had followed hand in hand all the way and was fueled by our friendship. Christer passed the anchor and linked in to a second pitch getting the most out of his run. An hour later I tied in again and started climbing, this time with no pressure or anxiety. I redpointed the splitter cracks, too. We dubbed the free route Ronny Medelsvensson, a name we feel is suitable for two middle aged fathers. Grading routes and especially cracks is tough business, but suggesting Scandinavian 9 feels fair to us and our efforts. Time of course will tell. Nevertheless, the route will challenge you with uncompromised steep crack climbing at its best, and the wall hosts many more routes to be freed, some of which will likely have to wait for the next generation. We’ll be back for sure and hope to see you there.