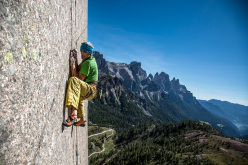 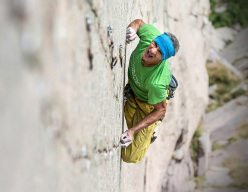 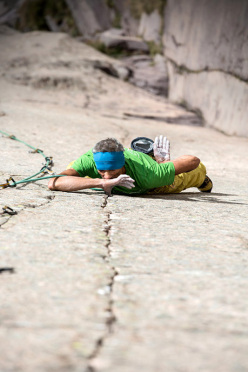 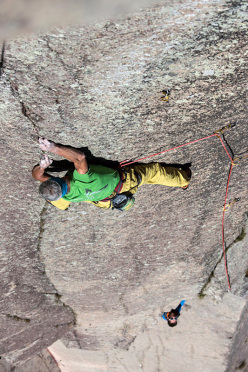 On 23/09/2014 Maurizio 'Manolo' Zanolla made the first free ascent of Pinne gialle, a difficult new 4-pitch climb up the side of the large central corner at Tognazza (Passo Rolle, Dolomites, Italy).

"The face is a wonderful balcony that looks out onto the Pale di San Martino." This is how Manolo, in his "In Bilico"guidebook to the Primiero Dolomites, describes that sheet of porphyry called Tognazza. It's impossible to overlook this face as you drive up to Passo Rolle from Fiera. It's impossible to not be struck by how different this is from of the world of Dolomite limestone that surrounds it. Tognazza is, quite simply, unique. And to a climber's eyes those smooth slabs, cut like a knife, evoke difficult and hazy games of balance, up the mirrors and scars the rock alludes to. And it is to exactly these mirrors and scars that Manolo returned to. In search of elusive equilibrium. Better still, of visions of possible balances. And so with his Pinne gialle he has now solved an old project of his 120m of climbing that “takes a line up the side of the large central corner”. To get there he had to climb the first pitch of the via Dell'antonio – Briosi, then the first pitch of Border Line, a route he had first ascended in 1997 with Cristina Zorzi. He then veered left, to climb the 4 pitches (30m, 15m, 45m, 30m) of Pinne gialle. The route finished up the final 15m of Gran Diedro. “All that was needed was looking at things from a different perspective to find, at least for me, the most beautiful route up the face.” is what Manolo wrote. The grades? He doesn't provide them, leaving this to future ascentionists. What is certain is that up there the climbing unites with a vision, that of equilibrium, which can perhaps never be measured. Perhaps you need to search for it, attempt it and try to imagine it, that balance... but it can't be taken for granted, there's no way of knowing whether you'll capture it. Just to get an idea of what we're talking about, have a look at the beautiful photos of Manolo on Pinne gialle taken by Matteo Mocellin.

Maybe it's because things are gradually getting worse, but during this summer that has seemingly never even begun while the ash trees lose their leaves at the end of July, I don't even care about going out into the mountains. Andrea insists that you don't need to use your fingers much at Tognazza and he convinces me to climb one of its easier routes. All of a sudden an old project of mine comes to mind, the one that runs up the side of the large central corner.

Once we reach the base we change plans and head right up the "Gran diedro", it's the route that gets closest to that project. I haven't been up here for ages but this delicate climbing, a game of balance and friction, is great fun. And the old project that runs upwards just a few metres away becomes immediate curiosity.

The next day I abseil in from the top and the scar that races down into the void seems to me to be the mother of all the cracks. Unfortunately a section seems to not accept any pro and that corner nearby is damn dangerous. Perhaps it's because by now I'm “differently young”, but I don't feel like risking too much and the “trad” dream immediately becomes a bolt dream.

"This idea" seems to slide into completely different dimensions and forms, the outlook both real and imaginary. And it gets more beautiful every day. When I attempt it in a single go for the first time, on top rope, I almost immediately do it. This really surprises me, but I know that without that safety the climbing will become much more complicated. Without stiffening up I will have to adapt to those necessary balance acts of friction that, from simple, can transform into paralyzing. And I convince myself that the climbing on this route, apart from a few sections, is more a mental problem than physical, because the route provides lots of points where you can rest and never troubles your power or stamina. And, better still, it doesn't even hurt your fingers.

I have half a day off and with Andrea we decide to give it a go, the weather isn't bad, the route should be dry and the forecast seems comforting. I'm very curious to find out what the gear is like and how dangerous it is to fall off some sections. The porphyry is lukewarm and the climbing today seems easier. When I set off up the crux pitch I have no ambitions, am under no tension, furthermore, the static rope is there, dangling like a lifesaver.

The first part is a move that requires great "sensitivity" but I abandon myself entirely to my feet and things run fairly smoothly. But when I succeed in climbing past that difficult, ugly move at half-height, things change. That static line I have to unclip from the quickdraws before clipping in my rope becomes a hated impediment, but by now I'm in a full-on battle to succeed.

I continue with exasperating slowness and protecting myself becomes increasingly difficult, my ankles begin to suffer and my legs start trembling. I don't even notice the first drops but then all of a sudden everything becomes slippery. At this point it makes no difference having climbing shoes or flippers and I fall downwards together with the hail. Somehow I manage to reach the belay and then the intense, cold rain gets us soaking wet.

Fifteen days later Erik kindly offers to accompany me, as does Matteo who has never been to Tognazza before and wants to take some photos. We abseil in, the crack seems wet and the weather fairly safe.

Unfortunately, the fever and the antibiotics didn't do me a world of good and I'm "decidedly wobbly". In fact, I fall off the second pitch. Back to square one. I set off again but then I fall off half-way up the difficult pitch. I set off again but a just a few metres from the end I lose the feeling in my feet, I move across slightly to see how they're doing, get distracted and find myself in the void again. I don't want and don't even have the energy to try again and so I decide to try and free the final pitch. I manage to do so and this motivates me to try the difficult pitch, but then I realise I really am spent. We head home.

There's another week of rain and then - all of a sudden - summer ends and the second day of autumn seems unreal. A cold, dry northerly wind blows up at the pass and on the summit the puddles are frozen over. I really want to go home but we decide to descend. Lower down, luckily, the wall is sheltered and the temperature is nigh perfect.

I'm with Erik and Matteo once again. I work the moves again, I don't want to unnecessarily waste any energy. I feel better today, I'm less afraid of that forty-five metre pitch and when I pass the bouldery section at half-height I almost feel as if I'm at the belay.

Nothing can be taken for granted in those final metres but today, that dry wind that blows so hard it empties my chalkbag helps me and I succeed. I'm really happy when I reach the summit but also a bit "defeated" because my "trad" dream is no longer, but maybe I've saved my life.

It seems impossible, but there was still space up there. All that was needed was looking at things from a different perspective to find, at least for me, the most beautiful route up the face.

The grade? I've really have no clue and I'm not even going to dare to put forward a grade as I don't have much experience at this sort of climbing and I'll let repeaters judge for themselves.

I would really like to thank Andrea Giacometti who helped me during the coldest days, Erik Girardini who remained immobile, at the belays, longer than his mother ever succeded in all her life and to Matteo Mocellin for the photos.

For the hardest pitch you need 19 quickdraws.