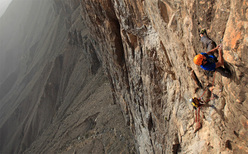 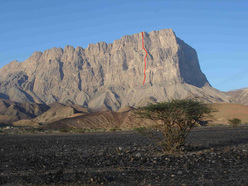 Hansjörg Auer and Much Mayr have carried out the first ascent of "Fata Morgana" (F7c, 800m) up the S Face of Jebel Misht, Oman.

Last weeek we reported about a top Austrian climbing trip in to Cochamo Valley in Chile in December, which included, amongst others, Hansjörg Auer. Pretty much as soon as he returned to the Ötztal the 25 year old set off again on another journey, this time to Oman together with Much Mayr, Berti and Heiko Wilhelm.

Auer had visited already the Oman in February 2008 and this year's itinerary was very similar to the previous one: warm up at the crag, then new multi-pitch in the mountain. So after stopping off at the crag "Little Gorgette" in Wadi Bani Awf and establishing "Sindbad" (F8a+), the four then travelled to the immense South Face of Jebel Misht, where Auer and Mayr established the serious multi-pitch "Fata Morgana" (F7c). The 800m route takes a direct line up the pillar to the left of Auer's "Flying Pegs" and is protected by a mere 2 bolts on the first crux pitch and a further 5 pegs on the next pitch, before easing off onto easier angled terrain with spaced natural pro.

A few days later Auer and Mayr, one of Austria's lesser known climbing talents, roped up once again and carried out another first ascent, "Dattelklauber Sigi" (VII, 400m) on the East Face of Jebel Misht, with only trad gear for protection. Upon returning Auer sums up his second trip as follows: "Oman is a country with enormous potential for climbing and guaranteed sunny conditions, delicious fruit Jakes and friendly population. The best of all though is that all alpinists will definitely find what they are looking for."


Oman information
Jebel Misht
Jebel Misht can be reached easily from Muskat. Take the motorway for 2.5 hours Nizwa, then continue along the state road for 1.5 hours to Bahla located on the south side of the mountain. Jebel Misht is roughly divided into two seperate walls, the 800m South Face and 450m East Face. Camp beneath the wall. Highly recommended a reconnaissance via jeep to check out the approach to the start of the climbs.

Little Gorgette
Little Gorgette is located at Wand Bani Awf, just below Balad Seet, circa 3 hours from Muskat. Sleep at the small oasis just beneath the crag.