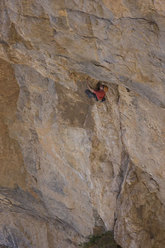 An Austrian team comprised of Hansjörg Auer, Thomas Schreiber and friends have made numerous first ascents in Oman, including the 8b multi-pitch 'Al Hamar' in the Jabel Sham Canyon.

Oman seems to be in vogue at the moment. After recently reporting about Pavle Kozjek's new route on Jebel Misht, here goes with the next report by Hansjörg Auer and his Ötztal friends. The Austrians have just returned from a three week climbing trip to the Sultanate where they established a series of new routes which, at F8b, may well be the hardest in the country.

The Tyroleans kicked off their winter season with the first ascent of '40 Räuber', a technical 8b in Little Gourgette, a crag which lies close to an idyllic oasis in Wadi Bhani Awf. The '40 thieves' was swiftly repeated by Barbara Bacher and takes a 30m line next to the famous 'Ali Baba'... for obvious reasons.

After having established a series of easier routes the group then travelled to the immense Jabel Sham Plateau where, awestruck by the mighty canyon overhangs, they found their way through the easiest sections to establish the three-pitch 'Al Hamar' (8b, 8a, 7a). This 110m route overhangs an impressive 50m and Auer celebrated the new year in style with a 1 January redpoint. Apart from the obvious physical form, this also required strong nerves...

No journey to Oman is complete without trip to Jebel Misht and before heading home Auer, Schreiber and Oberhauser made a swift repeat of 'Shukran' and a seven hour first ascent of 'Flying Pegs', a 16 pitch 8+ up the immense 900m south face.