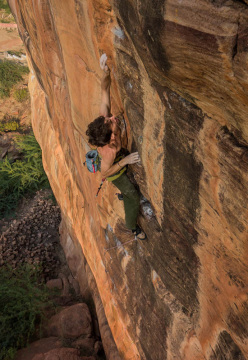 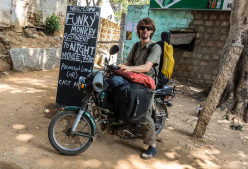 At Badami in India Nicolas Favresse has made a trad ascent of Ganesh 8b+.

Belgian climber Nicolas Favresse is currently on tour in India where he has repeated Ganesh, at 8b+ the hardest sport climb in the country. What makes Favresse’s repeat noteworthy is that he ascended it trad style, placing all the gear on lead and not using any of the bolts. While the climbing is never excessively dangerous, a fall from the hard sequence at the start of the route is not recommended. Climbed in this style, Ganesh checks in as one of the best trad routes Favresse has ever climbed... which given his experience, means a fair deal.

I was bouldering in Hampi and wanted to make a change so went for a short trip to Badami, only about 130km away. In Badami the rock is completely different from Hampi, it’s a really good quartzite, pretty similar to the rock I had climbed on the Tepuys in Venezuela. Badami has lots of cool routes with unique features that offer often good natural protection. Although most of the routes are equipped with bolts, some have been left clean to be climbed trad, while some other are bolted but can be protected safely.

For me the most striking line in Badami is Ganesh, bolted by Frenchman Alexandre Chabot and first freed by Gérôme Pouvreau.  Its rock is of perfect quality, it’s set in a beautiful location and its crux moves are unique, leading from one break in the rock to another. Basically, if you’re good enough to try it, you simply have to give it a go. It’s a must do!

Apart from being capable of climbing it, something else you need to take into account is the fact that route is in the sun from 7:30 am until sunset, which makes it really hot to climb in temperatures around 30°C. Since for me there was no way I would climb it before 7:30am, I decided to climb it in the night with a headlamp, which allowed me to take my time to warm up and give as many tries as I wanted without feeling in a rush. The first evening I tried it I was really close to sending it but I made some mistakes and had to come back for it. The next day I started to think more about the route and realized that it might be possible to climb it trad, so I went back with gear and it worked perfectly.

After having inspected the gear, I went for it and redpointed it first go. The gear is pretty good along the entire route, with pro on the horizontal breaks. At the first crux (the hardest for me) the belayer needs to pay attention because you are close to the ground and the gear is a bit low, but it felt safe enough so I just went for it.

I hope my ascent will motivate others to try to climb it on gear, too. It is one of the coolest hard trad lines I have ever climbed. One day hopefully the climbing community will agree to free Ganesh from its bolts… Because they’re superfluous.