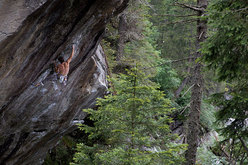 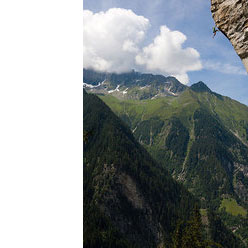 New routes in Austria's Zillertal by Fischhuber and Verhoeven

Kilian Fischhuber and Jorg Verhoeven have been active in Austria's Zillertal, making the first ascents of Dolby surround 8c+ and Ichi Ban 8c.

At the start of August Fischhuber made the first ascent of "Dolby surround", a 10 year old Uwe Eder project at the Breitlahner Zemmgrund. The route starts up Horny Trout 8a before traversing off left to reach a rest and a "dead-hard seven-move boulder sequence." Fischhuber attempted the route a couple of times during the international Petzl Roctrip climbing meeting a month ago, then managed to send the line after a further two days of work together with young Jakob Schubert. The Austrian believes the route to be somewhere in the region of 8c+, describing it as follows "it's a cool line directly above the mountain stream. When you lower off you have to take you shoes off before get a pleasant fresh dip."

Jorg Verhoeven on the other hand concentrated his efforts on a mammoth 90m arête which he bolted and cleaned, then sent thanks to a 200m rope lent to him during the meeting. The route is a mix of hard moves interspersed with good rests, but since there is no natural break Jorg opted not to place a belay at half-height but instead to continue to the top. The Dutchman, who is based in nearby Innsbruck, believes his exposed and spectacular "Ichi ban" to be circa 8c. Potential repeaters take care: a 200m rope is necessary to lower off from the overhang and the last bolt lies12m below the top...