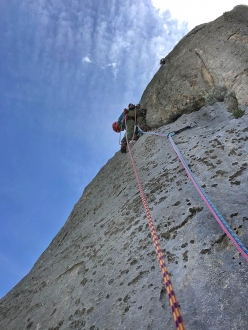 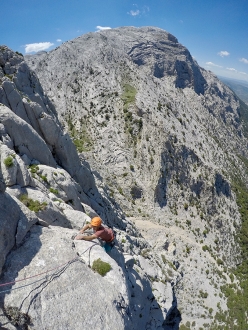 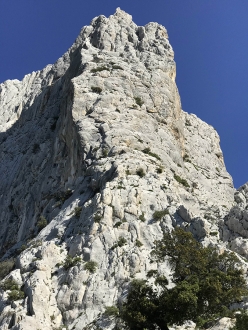 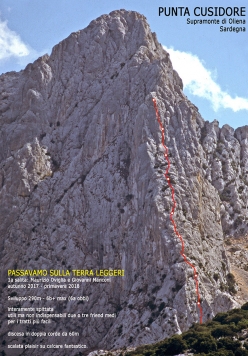 Between autumn 2017 and spring 2018 Giovanni Manconi and Maurizio Oviglia established Passavamo sulla terra leggeri, a new rock climb on Punta Cusidore, a mountain considered by many as one of the most important 'alpine' peaks in Sardinia.

There really isn't much more to say (apart from what I’ve already mentioned in my guidebooks and recent book La Linea Invisibile) about my first ascents on Punta Cusidore, perhaps the most important “alpine” peak in Sardinia.

This is my 19th (probably, I may have lost count) climb on this mountain and this number is indicative of my love for this peak where there always seems to be plenty of space to let the imagination run wild. After last summer’s trad and bolt route Diamanti e Ruggine, Passavamo sulla terra leggeri hails a return to the "plaisir" style of climbing I first brought to this mountain with my L’ombra della mia mano. All you need for this exceptional limestone line is a full rack of quickdraws, the bolts are never too run-out but some mid-sized Friends (never truly necessary) may be found useful for those who wish to place some additional pro along the way

I began this route last year with my good friend Giovanni Manconi but progress was hampered due to some minor glitches. We had to return on several occasions, despite the fact that it’s the type of route that could have been established in a single push: the drill had some tantrums on one day, while a memorable storm surprised us on another... winter then arrived in full force and we had to postpone finishing it off until this spring. In the meantime Giovanni had a car accident and was out of action for a couple of months. I chose to wait for him to recover; in the past I haven’t always shown so much respect (for example on the nearby Ombra della mia mano). But as you grow older you learn from your mistakes.

The new route ascends a line through the exceptional slabs and walls between Via dell'Amicizia and the classic Spigolo NW (Via del Finanzieri). Although it climbs close to them, the new route never crosses them nor does it interfere in any way whasoever, and the upper section breaches what can only be described as top notch limestone. About the name Passavamo sulla terra leggeri, treading lightly on earth: after "Diamonds and Rust by Joan Baez and Bob Dylan, this time I was inspired by a beautiful (historical) novel written by Sergio Atzeni. It contains all the Sardinia I have come to know during these last 30 years, and the Sardinia I hope will remain for a long time yet.

There is a saying that states you are born ablaze and die a fireman. Presumably this will hold true for me, too, but at times I’d like time to stand still, even though I know this isn’t possible. Sergio, who also wrote about climbing for the magazine Rivista della Montagna, disappeared among the waves of Carloforte many years ago. But his novels are a piece of Sardinia that I will forever carry in my heart.

02.07.2009
Umbras, Punta Cusidore: Sardina loves climbing
On 15 June Rolando Larcher and Maurizio Oviglia carried out the first free ascent of Umbras (300m 8a max, 7b+ obl.). They had made the first ascent of this rout up the N Face of Punta Cusidore (Sardinia) in 2008.