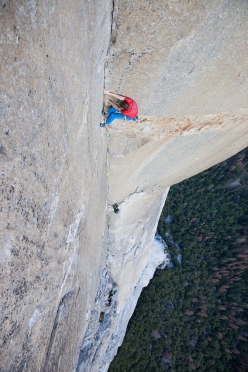 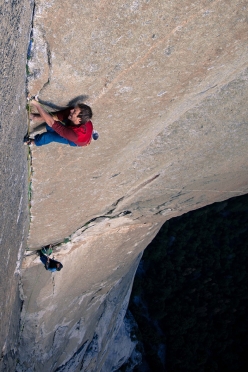 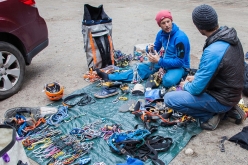 Much Mayr and Guido Unterwurzacher preparing their gear prior to repeating The Shaft, El Capitan, Yosemite
Photo by Ben Lepesant 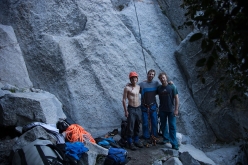 Ben Lepesant, Much Mayr and Guido Unterwurzacher in Yosemite
Photo by Ben Lepesant

Much Mayr and Guido Unterwurzacher repeat The Shaft on El Capitan, Yosemite

In spring 2016 Austrian climbers Much Mayr and Guido Unterwurzacher made a rare free ascent of The Shaft (Muir Wall free variation) on El Capitan, Yosemite, accompanied by Ben Lepesant who provides the report.

At the end of April, Guido Unterwurzacher, Much Mayr and I drove into the place that everyone knows as the Valley. The capital "V" is well deserved for it’s a place where everything is huge: the history, the walls, the waterfalls, and the quality of the rock climbing.

We had a number of ideas, but with mediocre weather at the beginning of our three-week stay, we decided day trips to the bottom part of El Capitan were the most sensible option. The idea was to prepare a free ascent of the Shaft Variation to the Muir Wall on El Capitan.

The Muir Wall was only the 6th route to be established on El Cap. The first ascent by TM Herbert and Yvon Chouinard in 1965 is difficult to comprehend even by modern standards: long splitter cracks without camming devices, no fixed ropes, only a minimal bolt kit, and above all battling both intense heat and a snow storm, all of it as a team of two. In 1994, Kurt Smith and Scott Cosgrove came close to freeing a variation to the Muir Wall: The Shaft. This bypasses the upper pitches via a large dihedral system before making a long traverse left to Magic Mushroom, where the last 5.13c pitch awaits. This ultimately shut them down on a futuristic ground-up effort during which they spent more than 50 days on the wall. Tommy Caldwell and Nick Sagar eventually freed the line in 2001.

We took advantage of being three people, and while the other two climbed I jugged the pre-installed fixed lines to Heart Ledges (the 10th belay of the Muir) and hauled a bag full of water. It went well: they both redpointed the so-called "5.13b-pitch", which in a lack of irony is 5.13b. After another two days of climbing and hauling, we were set up on Grey Ledges with all our stuff, some 400 meters above the ground. The next day was spent on the Silverfish Corner (5.13b) just above. It was the first hurdle for my two friends: after I had aid climbed the perfect 35 meter dihedral to get into good position to take some photos, they both worked the pitch. Guido’s first redpoint attempt ended down low. Much climbed well, only to have his foot slip after doing the last difficult move below the anchor. In the afternoon the sun was merciless. We retreated to our portaledges, where I made some coffee. They tried to get motivated to give it another try. In the evening, Guido outdid himself by sending the pitch. Only an hour earlier he had been deliriously looking for shade, and now there he was, putting up a fight of a lifetime that took him all the way to the anchor. As the sun was setting, Much put in a last try. Hanging next to him, I could sense the pressure he felt to follow suit. After a first attempt in which he displayed all his technical skill, he was now shaking like an Elvis imitator on too much coffee. We all took a deep breath as he clipped the anchor. Having already spent a considerable amount of energy (and supplies) we decided to go down to regroup before returning for the final push.

On the first day back on the wall, we made good progress, climbing another seven pitches. We bivouacked just below the chimney that gives the variation its name: a 5.12d squeeze torture for breakfast. It’s not the elevator shaft type shaft, it is more akin to an ill-designed mouth that leads straight into the dark bowels of El Capitan. It made me realize that even on El Cap, as far as cracks go there is a quality beyond the very unappealing. Guido’s first attempt ended after a long battle that took a heavy toll: his left knee was now a bloody, swollen mess, and quite representative of the poor Guido as a whole. Much first tried unsuccessfully as well, but soon after redpointed the pitch. Guido worked the upper part and returned to the portaledges, clearly well cooked. Since breakfast, his face had a lousy looking shade of green all over it. It didn’t look too promising for him in my eyes. His "rest" in between noon and five pm mostly meant trying to avoid a sunstroke. To everyone’s surprise, Guido successfully squeezed, battled and liebacked his way up the chimney. He’d won a battle, but I wasn’t sure about his prospects in this war anymore (I'm not into war vocabulary but, trust me, this was physical.). The effort had obviously taken its toll, even though he was a little less green in the face than after the first attempt.

The next day was my "day of climbing", and I enjoyed being up on a part of the Big Stone that was new to me. All El Cap routes have offered a variation of the same experience to me, and it is surely not because the experience sucks that I like to do it over and over again. The feeling while climbing the traverse over from the Muir to Chickenhead Ledge, a spectacular 12a, was characteristic of that experience: outstanding location, encouraging friends, and million dollar climbing. My last mission of the day was to aid the upper crux. A thin, glassy 5.13c-lieback. Not ideal for Guido’s and Much’s sausage fingers. We would see soon enough…

During the night, the portaledges were shaking in the wind. In the morning, things got rather tense. The wind was relentless, and so was the pressure that filled the air. I felt like I was of no help, and so I tied down the portaledges and waited inside mine while they worked the pitch 30 meters above. I listened to my fly rattling in the wind and thought about how trying to free climb El Cap was different from how I always climbed El Cap. It is only a minuscule percentage of aid climbers that fail to top out after getting further than halfway up, because failing is almost impossible unless you bail (bar a storm rolls in or you injure yourself in a fall). There is of course mystery, adventure and self-doubt, but failure won’t creep in three pitches from the top because you can’t do the moves anymore.

Guido made a loud "Yuhhuu" and interrupted my thoughts. He’d pulled out the stops and bagged his first free El Cap ascent! For a while he had been an unlikely candidate for this to happen, but he had continued to do what he does best: he let his climbing follow his intuition. I peeked outside and saw them hug each other. It was now pretty silent up there. Nothing was resolved. From the distance, Much looked cold. I stayed outside to watch his try. It lasted forever. Many times, it looked like he would fall. I held my breath. Guido and I didn’t dare to shout encouragements anymore. Would the next smear make him slip? The moves to the crux looked like a last ditch effort. Another foot smear. I could practically feel the glassy hold squeezing the rubber under his toes. Once more. It had to end at some point, and it did: he clipped the anchors and screamed; very much unlike the composed, wise man that he his. He had done it again, 17 years after free climbing up El Cap for the first time, he now had succeeded for the fifth time. We topped out in light rain and had a beer in celebration.

By five pm the next day we were happily basking in the sun on the bench in Curry village, eating copious amounts of It’s It! ice cream and feeling wholly good, fed and lucky.

Ben Lepesant: born in Luxembourg in 1990, Ben studies physics in Innsbruck and likes reading books, climbing and combining both.