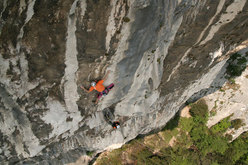 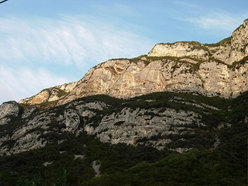 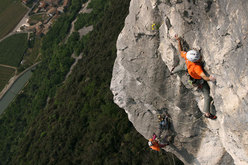 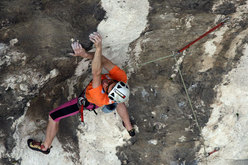 Nicola Sartori and Nicola Tondini have made the first ascents of three new multi-pitches on Monte Cimo (Brentino, Val d’Adige, Italy). These are Vola via (8 pitches, max 8a+), Gioco di equilibri (5 pitches, max 7c+) and Via di testa (6 pitches, max 8b+, 7c obb).

It's official: the explosive new Italian formula is (Nic)2, which results from the Nicola Sartori plus Nicola Tondini combination. Two mountain guides from Verona, two class climbers undoubtedly, two very different backgounds. Sartori is an extremely talented sports climber, so much so that in the heyday of Raboutou and Glowacz he placed 5th overall in the World Cup. Tondini on the other hand is first and foremost a mountaineer, bound by strict climbing ethics and who, in time, has increasingly upped his sports climbing ante.

Helped by the vicinity of the outstanding limestone Brentino - Monte Cimo the two have managed to channel their energies into creating and freeing a series of impressive routes together. Marked by an increasingly defined and severe style of climbing, their latest three offerings trace lines up the principal and most popular rock face on the spectacular bastion high above Val d'Adige. Located between the small towns Affi and Ala, these three routes are masterpieces of the extreme, destined to become a paradigm of their genre while the incredible "Via di testa" is a true challenge reserved for the strongest in the world.

Via di testa, or Out of your mind as the translation goes, has four pitches in the eighth grade, one of which is 8b while the other is 8b+... with a real obligatory grade of 7c. This equates to sections of 7c boulder between one piece of pro and the next. What is fascinating is that this result has come about by climbing free, from the ground-up, bouldering ever upwards. In real terms this means trying and falling on and off the same moves, at times for days on end, attempting sequences with the same spirit as those who usually choose a crash pad instead of a rope for protection.

No rush therefore. No need to top out as quickly as possible. The important thing for Tondini and Sartori is to climb without aid and to hook a cliffhanger or some other trickery only where they want to place a bolt. The result: immense 15 plus metre falls held by a belay plate, gloves and plenty of dynamic belaying, sucked down into the void towards the incessant rumble of the motorway deep in the valley below. One, ten, a thousand attempts accompanied by the constant, logical and persistent doubt that it would all be useless anyway. So much so that in the end, when all the rock had been explored and prepared for a adrenaline-fuelled repeat, the climb seemed impossible.

The two Nics had never considered, not even for a moment, the possibility that "Via di Testa" could be concluded without their redpoint. The route would almost have not even come about without a free ascent of all pitches. This is why, despite having been called to photograph the route prior to the ascent, nothing was published and everything was put on hold until at least one of them had managed to free all pitches.

The first pitch, a "mere" 7c, slotted into place immediately and they soon used it as a perfect warm-up. These 25 diagonal, overhanging metres with two obvious bulges and tufas are immediately followed by two "monster" pitches, those which made them suffer the most with their vague holds, monodoigts to push off and two finger pockets to match on. Higher up two "mere 8a" slabs and a splendid 7b, while the valley unfolds to the Brennero to the right. Up here the pro is incredibly run-out, on numerous occasions falling is simply not an option as no dynamic belaying in the world can guarantee against the violent impact.

Tondini described the day of the free ascent as "a champion's day", a day belonging to Nicola Sartori alone. In a certain sense it was the culmination, the epitome of 25 years of climbing at the Italian extreme. A quarter of a century, it should be noted, lived with nigh obsessive discreetness and humility, at times even exaggeratedly so. On 25 October Nicola Sartori was in a league of his own: with temperatures just above zero and cloudy skies he transformed into a vertical machine designed to relentlessly crimp one handhold after the next. He succeeded, with Tondini cheering him on and explaining the moves, you never know, he might just forget a move or two. Sartori exchanged the favour on 5 November, Tondini's turn to free all pitches in a single day. A perfect end to their two-year adventure.

Nicola Tondini explains "making the first ascent on such a compact and overhanging face in such perfect style and with such precise rules seemed like a dream come true. Just the thought of freeing each single pitch seemed to be a great achievement initially. Climbing all six pitches on the same day without making a mistake, with those difficulties... well, perhaps we were asking a bit too much. But every now and then, thanks to mutual friendship, dreams actually come true."

by Andrea Gennari Daneri
A complete report has been published in Pareti nr. 60, currently on sale.