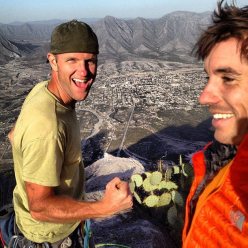 Josh McCoy and Alex Honnold after having made the first free ascent of Mi Regalo Favorito (8b) at El Portreo Chico, Mexico.
Photo by Alex Honnold

Alex Honnold and Josh McCoy have made the first free ascent of Mi Regalo Favorito at El Portreo Chico in Mexico.

Evidently Mexican big walls have something special about them, too: after making the first free ascent of Giraffe up El Gran Trono Blanco a year ago, this February American climber Alex Honnold crossed the state border once again, this time with Josh McCoy with his eyes set on another old unfreed project, Mi Regalo Favorito. The 19-pitch route climbs a line up the striking West Face of Cerro San Miguel at Portreo Chico and had been equipped ground-up in the late '90's by one of America's prime activists Kurt Smith who spent 21 nights on the face with Jeb Vetters. The linehad remained an unfinished, open project.

"I've known about it for years" Honnold told Planetmountain "but finally got motivated to put in the work and actually climb it." This sounds simpler than it was: "The route had never been cleaned, in fact I don't think anyone had ever touched it at all. We spent something like 3 days cleaning loose rock and cactuses off it to make the whole thing climbable. And we removed 2000ft of old static line that had been left on the route."

Mi Regalo Favorito now shines in all its glory and while the crux third pitch whih weighs in at 5.13c/d (8b), the other 18 pitches are by no means banal. "It was quite the exciting process. Bueno" concluded Honnold.