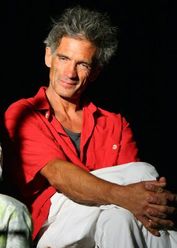 On 25 April Manolo, a.k.a. the Magician, repeated Thin Ice, the route bolted by Larcher and Bonvecchio and freed by Nico Favresse at Terlago and in the limelight just a few days ago with the first repeat at the hands of Riccardo Scarian.

Manolo was with us that morning, sharing his beautiful, intense and profound vision before finding that special lightness and freedom on the rock face. As he has always done, as we are sure here will do for a long time yet.

Thin Ice by Manolo
Had it not been for Rolly (Larcher) then probably this year I wouldn't have begun climbing yet. It's been a difficult year for my climbing and not even all the snow that fell this winter has managed to bury my half century.

I had almost adapted to being distant from this environment and everything that surrounds it, but just when I turned 51 years old Rolandone managed to drag me to Terlago. It really was strange to begin again, so undecided, amongst that tribe of climbers who constantly look upwards and those less metal-sounding carabiners. Suddenly a hold broke and while the blue winter sky rapidly disappeared, I realised that my desire had returned.

That line, the one in the middle, really was beautiful and I failed to resist... I didn't even wait for the sun to set and I was already there, the single moves didn't even seem that difficult. A week later though my tendons were still sceaming from all that enthusiam but that route, suddenly back in the limelight after 2 years of absence, was being courted by others. I thought it perhaps be better to wait, but I was tempted and who knows knows why, with all the routes there are in the world, one is captured more by one than others. Probably this is also due to the fact that I'm not that good and therefore I have less to choose from. But a poisenous axe and a serious cut to my finger forced me to give up for a while.

When I started to get better I returned to understand whether the route could still satiate my ambitions. I didn't feel that great and I had almost completely lost my stamina, but I was still decently strong and I sensed that I could do that move better even without that poor finger. Three days later, on 25 April, the day of Liberation, without even believing too much in myself I managed that move just like I wanted to, all I needed to do was climb to the top.

At times some routes become easier if we concentrare only on the next move and we manage to remove ourselves from the global project. We become lighter, perhaps only mentally, but this can help. I really want to thank Guido, a semi-unknown talent who belongs to that generation which is reaching half a century and who incredibly fell twice from the final moves, perhaps out of cavallery. Right there where my great friend Roberto Bassi, burnt away too early by life, had laid the seed of a dream. I hope I'm not too old to dedicate this ascent to him.