► News ► Climbing ► Malvasia 22 years later... the first repeat by Cody Roth and the recollections of Manolo 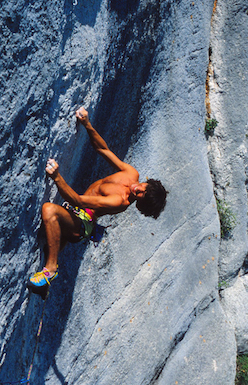 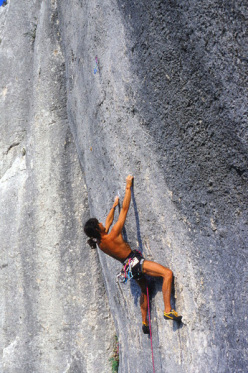 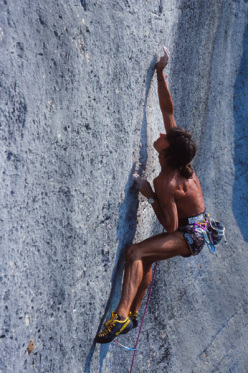 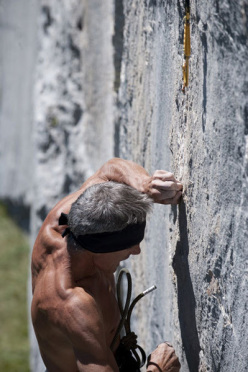 Malvasia 22 years later... the first repeat by Cody Roth and the recollections of Manolo

On 28 December 2010 the American climber Cody Roth carried out the first repeat of Malvasia at Dvigrad in Croatia, the route bolted in 1987 and freed in 1988 by Maurizio 'Manolo' Zanolla which no one had managed to repeat. Roth believes the route to be a good 8c+... The story of Malvasia as told by Manolo and an account by Urban Golob

There are epic routes in sport climbing, too. And at times they are routes which, at the time they were freed, passed by practically unnoticed; better still, who's real value was difficult to comprehend. This is the case of Malvasia. A slab, just over 20m high, lost on some unknown limestone outcrop in Istria which now, 22 years later, has been repeated for the first time by Cody Roth. Yes, 22 years... a "geological" delay which merits a bit of background information... and a little bit more.
It was 1987 when Manolo discovered that anonymous jewel located opposite the castle at Dvigrad. It has to be said that those were special years for Manolo. And that they were special years for the extremely young activity which was to mould into sport climbing as we know it. Call it a vision, if you wish. Or try to comprehend that this was the spirit of that era... The fact of the matter is that there, where beforehand there was nothing, Manolo bolted a small rock garden in which blossomed, amongst others, Malvasia. A "mirror like" climb (read technical face climbing), a style the Mago - magician - specialises in and which he freed in 1988, grading it 8b+...
This would seem pretty much like a normal story, were it not for the fact the Malvasia resisted all repeat attempts for years and years. Perhaps it would seem a bit more normal if you consider that, in the meantime, a few holds have broken. Or at least that's how the story goes. But evidently there is nothing normal about all this seeing that the route has achieved some sort of mythical status. Along with another legendary Manolo route, redpointed in 1988 and graded 8b+, in former Yugoslavia. We're talking about Maratoneta, the route in Paklenica which resisted all assaults for15 years and which was finally repeated in 2002 by the extremely talented Uros Perko. Who, not by chance, suggested an upgrade to 8c.
One could add further that, in that era, the real worth of Malvasia and Maratoneta was not fully comprehended (and not only in the sense of their difficulties!). One could also add that, 14 years later, Manolo returned to Malvasia and quickly climbed the crux (without discovering any broken holds) - as Fabio Palma reported in his article published in 2002. But it seems fairer (and more epic) to ask Manolo himself about the emotions he felt when he heard about the first repeat of his Malvasia...

Hi, I read the news you sent me... fantastic, I'm really pleased, also because that route seemed to have been abandoned, forgotten about... and despite it's grade, it's naturally a very beautiful "old style" route. And perhaps it's important to help comprehend not only how climbing has developed, but also the "difficulty" of routes on our continent.

It seems like only yesterday when back in 1987 I drove my 50km a day down those roads still misunderstood, in Istria and Dalmatia, when out in the distance I caught sight of that extraordinary band of limestone, on the opposite side of the valley, close to the old castle. I remember that my girlfriend was truly impressed by the number of snakes we encountered on our walk to the base of the crag. I didn't even consider taking a different path and headed straight across the valley, driven on by that compact wall, heedless of the bushes and snakes which, only afterwards, did I learn were particularly... poisonous.

There wasn't anything there at all... not one single route, the face was completely empty, it seemed impossible, the place was ideal, perfect to bolt something. And so that day Malvazya, as well as others, came to life. Naturally it was the first. The name was all about that white wine, with its sweet and pungent taste just like that land, bathed by a slightly melancholic sea, thin and hard which, when split, hues red. That grey, impossible looking wave was the most beautiful line of all, it left its mark on my fingers and remained ingrained in my tendons.

15 years later I was back in the area for a conference with Fabio Palma and Erik Svab, but I didn't want to see that place again, I feared ruining a beautiful recollection. Everything was a change in those places. But I was curious, much had been said about the route... some holds had broken... impossible... it had never been climbed before etc etc. I don't think my friends had to work hard at convincing me... and beneath that grey wave I started climbing once again. I remember the usual tendonitis, a decidedly humid day and the holds marked by Perko's various attempts... who, I remember, kindly and decidedly suggested 8c.

That day I didn't discover any broken holds and it didn't seem as difficult to me as people had said. And, in truth, nor did it seem as difficult as I had remembered. Instead, I thought about the new generations who no longer climbed these sort of things and perhaps couldn't make out clearly what lay between one hold and the next. It was only a matter of time.

When I first climbed Malvazya I graded it 8b+, it seemed harder than the other climbs I'd done but giving it a bigger grade seemed excessive, for three simple reasons. The first was that the route was rather short. The second was because, cautiously and with a lot of modesty, I thought I'd never manage to climb 8c. And thirdly, the warm climate certainly doesn't help on routes like this one.

Yes, 20 years ago on those rock faces one was really cautious about progressing even a quarter of a grade, and confirmation of this can be found in those severely graded routes which at some crags seem to have stopped a moment which has all but disappeared. I don't know what happened since the last time I climbed it, perhaps Perko can be more precise, perhaps an important hold is missing... why not ask him...

But it's great and I'm really pleased that that route, born in 1987, isn't completely forgotten about and that in some way it has etched its way into memory. They say that reading is about encountering two solitudes and that that particular style of climbing is the same thing: it teaches understanding about the co-presence of different truths.

Happy New Year to everyone
Manolo

P.S. posted on 03/01/11. It seems as if there has been some misunderstanding in the article about Malvaziya. Here's an attempt to remember precisely that day in 2002... (helped also by Fabio who held my rope). On that day I was driven to climb by the fact that people had said that something was missing. I think that there are enough witnesses to say that on that section I didn't encounter any particular difficulties (as I believe Fabio Palma and Urban Golob state in their accounts) rather, in the central pocket section where I encountered big difficulties the first time round, too. I also seem to remember having said that if something was missing it didn't compromise or concretely change the overall difficulty (also because there were different ways of climbing that section). I immediately climbed that section without difficulties and therefore didn't notice if something had broken, which may well have been the case. I therefore believed that the route was more or less as difficult as it had been when I first climbed it. Various holds can certainly have broken off in the meantime and and I really believe that this may be the case, otherwise the route wouldn't be this difficult... now it's evidently another route, decidedly harder. The current level of modern climbers is extremely high and they climb with ease up all angles and I cannot but admire and envy them. Nevertheless I'm still convinced (without wishing to offend anyone) that for a certain period during the '90's many climbers put a certain style of climbing to one side and therefore lost a certain aptitude for that genre of climbing. This doesn't mean that the best climbers of that period too weren't always able to climb up everything, something which I, unfortunately, never managed to do, above all on overhangs.
To Cody I want to extend my sincere congratulations
Manolo


>> Published below is an account by Urban Golob, the Slovenian mountaineer, journalist and photographer who has provided us with some great photos of Manolo and some of Uros Perko on Malvasia.

MANOLO AND MALVASIA
by Urban Golob

I photographed Manolo at a smal crag close to the sea-side at Rovigno about 10 years ago, the day after he had gone to check out Malvazija again since there were some thoughts that a small hold was missing from the route. The witnesses told me that Manolo did not climb the entire route for the second time, but he managed to climb the crux without serious problems, finding all the holds in the right place. As I remember, they said that Manolo climbed it in two parts without any previous tries... Manolo visited Rivogno because he gave a lecture about his climbing at a small climbers' meeting.
I photographed Manolo the next morning. It was winter, very cold and windy. Manolo climbed a couple of routes just above the sea (one is 6c+, the other 7a) in what were nearly freezing temperatures for me. It really was like a vertical ballet above the sea...Unfortunately at the lab they made some mistakes while processing the film, so the quality of photos isn't as good as it could have been. Anyway, I'm happy that I have some shots of Manolo, to remember him as a man who impressed not only me but everyone who met him during that time in Istria and everyone who knows his climbs.