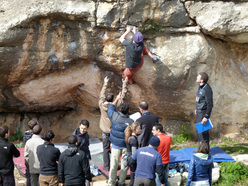 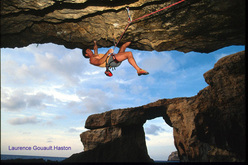 Stevie Haston on the first free ascent of 'View to kill' 8a, Gozo, Malta. The Azurre window can be seen in the background
Photo by Laurence Gouault 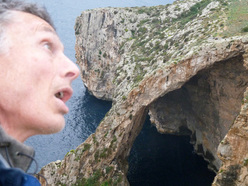 Although Malta is perhaps not on everyone's lips at the moment, if Stevie Haston's hunch is anything to go by, one day it may well transform into a world-class climbing destination. Home to numerous impressive seacliffs, the little island in the Mediterranean Sea has recently hosted its first ever bouldering competition to which the British climber was invited, unsurprisingly so since he is of Gozo origin - the small island just off Malta - and he spent much of his early childhood summers swimming, fishing and climbing up and down the cliffs.

Haston believes that "in a short time it will become a mellow and very varied destination, bolt and trad, bouldering, less rain than Spain. In addition, it has some great swimming, walking, diving, history and art, so you can have a multi-activity stay with the entire family." Sounds very interesting indeed and it will no doubt be intriguing to see how the island develops in the near future. In the meantime, check out his competition report below.

Bouldering comps are not my bag, but this Maltese meeting of climbers who used a comp as an excuse to pass a friendly day trying hard on some great stone was very sweet. The Malta Climbing Club organized the event or happening with the support of some generous local sponsors and kind volunteers, they all need a big thank you, but I think they know already.

The event was held at Wied Hasan, a very attractive wave of colourful rock just above a deep water soloing venue, ideal and idyllic for the comp. I can recommend the place for any visitor and you will pass a great day doing great problems, you won’t regret it. I am hard to please in my bouldering and this wave of steeply bulging rock had me pleasantly surprised and smiling with a big grin. It was great to do some spotting and help and thus join in and share the joy. The problems were stiff little bulges that were often climbed by a hefty heave and then a precarious mantle to finish.

There were two different events, an A category for the dudes and dudesses and a B category which was slightly easier. There were people from Spain, the Czech Republic, Sweden, Belgium, Turkey, Britain, Australia and one old codger from the Principality of Gozo. I was also pleased to meet the Maltese Parliamentary Secretary for Sport Mr. Clyde Puli who was a pleasant chap, deeply interested by climbers and seemingly willing to support future projects.

B Cat winners were Martin Micallef and Tania Ellul and A Cat winners were Jeffrey Camilleri and Claudine Gatt. Jeffrey Camilleri needs a special pat on the back for being Malta’s best climber at the moment and a stalwart for cleaning and preparing new routes. Malta needs more climbers to help develop its stunning potential as a rock climbing destination and the main idea of the comp was to encourage the local climbing community to be a cohesive and productive group with this little festa of climbing and it succeeded marvelously.

Amongst the people present were the three Maltese summiteers of Everest who succeeded on their first attempt, a mark of their fitness and resolve. I was brought in by the Maltese Tourism Authority as special guest and speaker at a soiree which took place after the Comp. I was especially pleased to see 40 boy Scouts in the audience from the Sliema Scout group, the oldest Scout group outside the UK. This Scout group was a cradle for budding climbers who were originally helped by the Royal Marines.

Anyway the lecture I gave was enthusiastically received by the audience who were mostly unused to seeing snowy mountains, ice climbing, and snowboarding. Naturally I got to know some of them much more over a great group meal and a few beers later. The down-side to all this was that I was very tired doing the Maltese Marathon the next day, but such conviviality must not be denied at the peril of your soul. Out of our little group two people did the full marathon and one the half, which is quite a pleasing percentage I think.

The next day I visited a new special cliff which is secret at the moment but will make the news soon - pull your finger out Jeff and get your project done - it’s a peach cliff. I also visited the neighbouring island of Gozo where I spent some of my childhood climbing. This was in the company of Simon Alden and his wife Doranne and we visited some great cliffs, comparing notes and looking at each others secret projects. Simon is the president of the Malta Climbing Club and is keen to promote climbing pn the islands for everybody but particularly to bring in new Maltese to the sport.

I spent all too brief a time on the islands and very much regretted leaving after such a short trip. I promised my new friends I’d return and climb, and experience sunny days and sunny smiles. Long live Malta and Gozo, a place stuck in time and space between the Azure of the sky and the Turquoise of the sea.