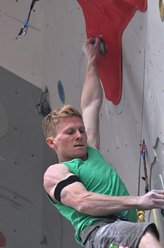 Magnus Midtbö, 9a at Santa Linya

At Santa Linya in Spain the Norwegian climber Magnus Midtboe has sent two 9a's, Fuck the system and Directa open your mind.

With the competition season over, Magnus Midtbö is now getting to grips with... the rock. The result: Fuck the system 9a at Santa Linya on his second day in Spain. And yesterday another 9a in the same cave, Directa open your mind.

In 2008 Midtboe slept directly beneath "Santa" to send his first 9a+ La Novena Enmienda. Even if there are plenty of other super-steep projects in the cave, the Norwegian is off to Oliana nearby. We're bound to hear more soon!