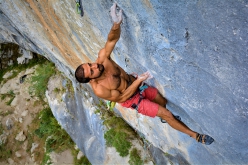 Lorenzo Bogliacino climbing Naturalmente 9a+ a San Rocchino, Camaiore, shortly after the repeat by Gabriele Moroni. The route was first ascended by Adam Ondra nel 2017
Photo by Elisa Lauretano 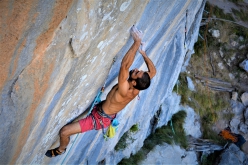 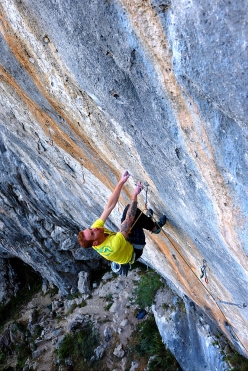 Gabriele Moroni making the first repeat of Naturalmente 9a+ a San Rocchino, Camaiore, Italy, on , 08/10/2021
Photo by Luca Andreozzi

At the crag San Rocchino close to Camaiore in Tuscany, Italy, Gabriele Moroni then Lorenzo Bogliacino have repeated Naturalmente. Graded 9a+, the route was freed by Adam Ondra in 2017 and unrepeated.

The sudden drop in temperatures has resulted in two important repeats at San Rocchino close to Camaiore in Tuscany, where first Gabriele Moroni then Lorenzo Bogliacino checked in with the second and third ascent of Naturalmente, a technical 9a+ freed by Adam Ondra during one of his 2017 raids. While Moroni is no newcomer to this grade, for Bogliacino this represents not only his hardest ascent to date, but also "the best moment of my climbing life." The 24-year-old stationmaster describes the process.

NATURALMENTE by Lorenzo Bogliacino
The first time I touched the holds of Naturalmente was two years ago, immediately after my repeat of La Terza Età, my first ever 9a, but I failed to reach the chain; I realised immediately that the level of difficulty was way beyond me.

After a beautiful winter bouldering at Varazze with my girlfriend Elisa, last May I returned to the route: I immediately managed to do all the moves, but my stamina was far too poor and even doing tiny links required a huge effort.

In summer I traveled and climbed a lot in France, first in Brianconese and then in the Verdon. After having made the first repeat of Maxitraxion (8c+) at my home crag Pianbernardo, and having climbed the majestic Flute en chantier (8c+) at Ramirole, I realised I was in good shape, so at the start of September I returned to try Naturalmente

Despite my night shifts, my job allows me to climb every 2-3 days, and so thanks to Elisa and all my friends in Tuscany (and lots of money due to all the long travels), I managed to try the route a fair bit.

I spent 14 days attempting the line in terrible conditions but nevertheless had great fun with a bunch of the most motivated people I know, after which the last few days have been really incredible: on Thursday Gabri Moroni succeeded in making the first repeat of Naturalmente and then on Saturday, thanks also to the freezing wind, it was my turn!

After getting past the first and hardest section that kept spitting me off, everything turned out perfectly: instead of getting flustered I realised I was enjoying myself, just like a child, and my mind was completely focused. All I thought about were the moves, and how cool it was to be there on the redpoint burn.. I think I’ve never experienced such a sensation before on any other route!

The line was bolted by Marcello Bruccini / Stefano Zanchetta, sorted out by Luca Lucchesi and then freed by Adam Ondra in 2017. It perfectly suits my preferred climbing style: fingery, overhanging but not too much, some rests that need milking properly and a real stamina battle all the way to the chains. As to the grade, for me is much harder than the 9a’s I’ve climbed previously and it’s certainly one of the most beautiful routes I have ever tried; put simply, for me it’s a dream come true!