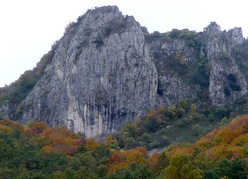 Liscia Palazzo in Abruzzo, 24 routes from 5b to 7a+ at 1200m altitude.
Photo by Tommaso Sciannella

Andrea Di Donato and Tommaso Sciannella introduce the great little crag l Liscia Palazzo in Abruzzo, 24 routes from 5b - 7a+ at 1200m altitude.

On a cold autumn day, after the first snow has dusted the Maiella peaks, we tried to navigate through the roads beneath Palena, on the lookout for the crag Liscia Palazzo. After a couple of curves a gigantic rock face, more than 100m high, appeared through the cold fog. We looked in awe and, following the instructions we'd been given, realised that this was the crag we'd been looking for. Immersed in the red forest of the Majella National Park, Liscia Palazzo faced us with all its might. After a 15 minute walk we reached the base of the 24 beautiful routes and soon discovered that the "Smooth one" hosts a fantastic 5 pitch route up vertical, mid-grade terrain. Unfortunately the rain then set in and we realised that climbing was out of the question. This time round!

The crag was discovered by Rinaldo Le Donne with his friends Emilio and Cristiano who bolted all the existing routes. There is still plenty of potential for new routes at Liscia Palazzo and the crag is definitely worth a visit for the beautiful climbing on offer and the fascinating surroundings. If visiting the area, don't miss out on two other great crags, Pizzoferrato and Pennadomo.