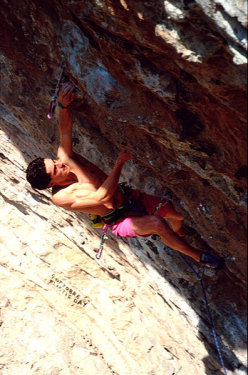 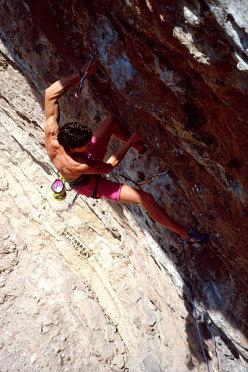 Everyone knows that climbers need dreams to fuel them. And that all dreams need time to mature. This is exactly what happened with another line that dreams are made of at Italy's historic crag Erto. It all started off with "Sogni di Gloria", the ultra-steep 15m bulge first climber by Gerhard Hörhager from Austria who, at Erto and the rest of Europe, represented an important reference point for the upside down world of the late 80's. Now, 22 years down the line, the saga continues: after the first 15m of dreams of glory - still considered a tough 8b+ - there are now another 15m of vertical slab climbing. As if to say, two opposing worlds, overhangs and the slabs, living together in the same vertical journey.

The trip begins by climbing through the bulge of "Dreams of Glory" but a meter before reaching the "old" belay everything changes... both the style and terrain. From here the route continues straight up (and parallel to "Mochio") and explores a smooth, vertical 15m grey slab. The final 3-4 meters await with a sting in their tail, a series of micro edges that need to be truly mastered to reach the chain.

The result is a 30m "super route", completely natural graded 8c+: "Nothing more, nothing less" confirms Luca "Canon" Zardini who once again adds an important page to the history of climbing at Erto. Before reading the report sent to us by the Italian athlete based in Cortina, it's worth noting how much everyone contributes to someone's personal dream. Such as Andrea Polo, who bolted this great continuation of the story.

THE DREAM LINE by Luca Zardini
On 14 March I managed to make the first ascent of "La linea dei Sogni" 8c+ at Erto. This is an extension to "Sogni di Gloria", the legendary route freed by Gerhard Hörhager way back in 1987. At the end of the 1980's this route definitely left a mark of the Italian sport climbing scene, it was one of the first really steep routes and "Sogni" became a pure reference 8b+ in the historic crag above the Vajont.

In December 1991 I carried out one of the first repeats of this route, after Gerhard's first ascent and Sandro Neri's repeat and already then we considered the possibility (albeit remote) of continuing the route up the smooth and difficult vertical slab which continued above the existing line. Only last spring did this extension come to life, thanks to the work of Andrea Polo, an Erto habitué and one of the strongest repeaters of Sogni. The new line runs parallel to "Mochio" and tackles the beautiful and technical grey slab.

I started to check the route out in October with some sporadic and complicated attempts, seeing the difficulties I had in figuring out a sequence up the final section. My first serious attempts started last March after a long and impressive winter which resulted in more than 6 meters of snow at home. Between one obligation and the next I nevertheless managed to train well and gain the form necessary to try the route again.

The right day arrived one Saturday in mid-March. After a couple of attempts at repeating the difficult moves of "Sogni di Gloria" I shot up the final part of the route which a determination and desire of an old warrior... After a failed attempt just a few moves from the top I then managed to send "La linea dei Sogni", the line dreams are made of. This is what I called the beautiful and completely natural route and I'd like to dedicate it to the crag which I have strong ties to.

I have plenty of memories connected to Erto and almost 20 years of climbing here. Two decades spent climbing hard routes with friends, many of whom were there to cheer me on this time too... all with more grey hair but the same desire to climb as before.

There could be something else in future seeing that it might be possible to connect the difficult and steep "The big mother" with this new slab. But that will be another story. Stay tuned.

P.S. Thanks for Alessandro for his belaying