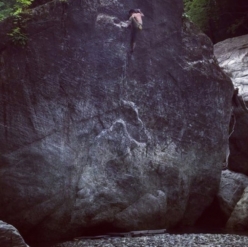 The video of Keita Kurakami making the ground-up first ascent of Neutralism, a huge highball boulder problem in Japan.

Apart from being a talented big wall climbers, Keita Kurakami is also capable of sticking his neck out of difficult highball boulder problems. His ascent of Neutralism is a case in point; Kurakami opted against checking out the line on toprope and freed the boulder in summer 2017 by exploring the moves ground-up… risking huge falls in the process.

Clearly this style of ascent is associated with an exponential increase in difficulties, and with this rigorous ethic it comes as no surprise that after his ascent of The Nose, the Japanese clarified that he had split his ascent into two due to poor weather. And that he’ll return next year, more motivated than ever, to climb the route in a single push and add his name to the record books. before seeing him back in action on El Capitan, enjoy this truly impressive ground-up effort.

Of course there is not the only success. Every fall is a stepping stone that leads to the top. #noplacetoofar #trailbutter

...and for sharing few movies. Neutralism / First ascent by ground up style. #trailbutter