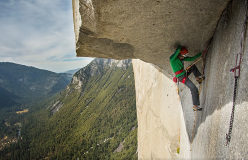 Jorg Verhoeven battling with The Great Roof during his attempt to free climb The Nose, El Capitan, Yosemite
Photo by Jon Glassberg - lt11.com

The video of Dutch rock climber Jorg Verhoeven repeating The Nose on on El Capitan in Yosemite, USA, in autumn 2014.

Last autumn Jorg Verhoeven made a rare free ascent of The Nose on El Capitan in Yosemite. First ascended over 47 days in 1957 and 1958 by Warren Harding, Wayne Merry and George Whitmore, this iconic route has arguably transformed into the most famous rock climb in the world. It was finally freed in 1993 by Lynn Hill and, in what is hailed as one of the most significant free climbing achievements ever, climbed free in under 24 hours by Hill in 1994. The route had to wait a further 12 years for its first repeat, at the hands of the extremely talented American Tommy Caldwell and it is these two extraordinary climbers who narrate Verhoeven’s road to success.

02/10/2002 - Lynn Hill and The Nose
Interview with Lynn Hill, a world-class sport climbing symbol. Her legendary one-day free ascent of The Nose on El Capitan in 1994 Yosemite and her entire vertical world as seen by Lynn herself.