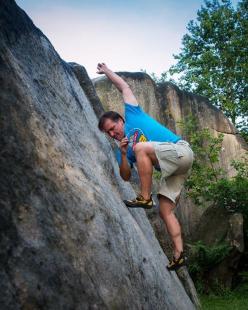 Johnny Dawes continues to explore the limits of climbing without hands. One of Great Britain’s most brilliant and influential rock climbers during the 1980’s and ’90’s has never lost sight of the importance of keeping climbing a “game” and his interest in moves that require an even greater body control remains high. The route that Dawes attempts in this video, Permutation Rib on Caley’s rough gritstone, isn’t as difficult as his legendary creations such as The Indian Face, Quarryman, Gaia, Braille Trail and End of the Affair to name just a few, but it’s always interesting - and instructive - to watch the master of slab climbing at this game of balance and rhythm.

15/04/2015 - Johnny Dawes no handed climbing
23/12/2011 - Johnny Dawes - the rock climbing interview
Interview with Johnny Dawes, one of the most talented and influential British climbers of all times.