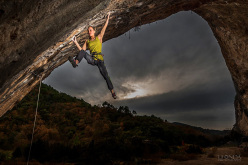 At Santa Linya in Spain 16-year-old sports climber Janja Garnbret has flashed La Fabelita, her second 8c. On the same day she onsighted an 8a+ and an 8b.

"It goes without saying that the speed of this ascent is nothing short of remarkable and indicative of greater things to come." We wrote these words in reference to Janja Garnbret and her first 8c+ in early November, and despite being hailed by many as the future of sports climbing, no one could have imagined that not even two months later the 16-year-old Slovenian would blaze the record books by flashing two 8c’s. The first, as reported Rollito Sharma at Santa Linya in Spain on 29/12/2015 and the second La Fabelita at the same crag on 31/12/2015.

Before her flash Garnbret warmed-up on a 7b and onsighted an 8a+, Irak Attack. Evidently on enviable form, she then hopped onto La Fabelita and received all the beta from Mina Markovic who had redpointed the route at Christmas shortly before concentrating on sending her 9a. Garnbret dealt with the fairy tale in less than 15 minutes and, in truth, the battle was rather one-sided: according to eye-witness reports Garnbret reached the chain without serious difficulties and had plenty of margin. To finish the day off, she then onsighted La ruta del Sol. In short: 8a+ onsight, 8c flash, 8b onsight. Yes, greater things are still to come.