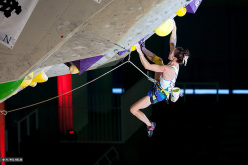 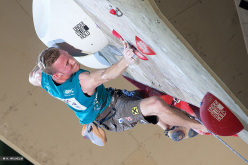 Jakob Schubert competing at Inzai, on his way to win the Lead World Cup 2014
Photo by Heiko Wilhelm / IFSC 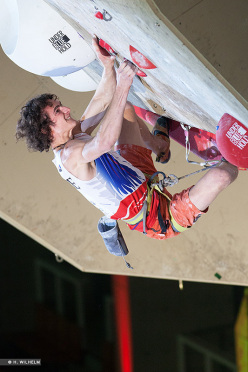 The Lead World Cup 2014 was won on 25 October 2014 at Inzai in Japan, one stage ahead of schedule, by Austria's Jakob Schubert and South Korea's Jain Kim. The stage was won by Adam Ondra and Jain Kim.

Game over! After the penultimate stage of the Lead World Cup, held at Inzai in Japan last weekend and won by Adam Ondra and Jain Kim, overall 2014 victory has already been secured by Austria's Jakob Schubert and South Korea's Jain Kim. Thanks to their results in the land of the rising sun, Schubert and Kim have amassed so many points that, even if they score 0 at Kranj in mid November and even if this final stage is won by their closest rivals, Schubert and Kim will still have more points than everyone else.

For the Austrian this victory isn't merely great confirmation of the Cup won in 2011 (the year in which he dominated the circuit, winning 7 out of 10 events), but it also marks an extraordinary physical comeback after having injured his finger seriously last February, just before the start of the season. For Kim this third World Cup, after those won in 2013 and 2010, is the culmination of an outstanding season which saw her finally win the Lead World Championship. A true rock star.

While the die has been cast for the gold medal, the battle is still on for silver and gold, with Frenchman Roman Desgranges and Austria's Magdalena Röck currently placed second. Hot on their heels are the likes of Sean McColl, Domen Skofic, Adam Ondra and Ramón Julien Puigblanque in the men's event, and Mina Markovic and Anak Verhoeven in the women's event. Any one of these athletes can still win these medals and, as usual, things go down to the wire at Kranj in Slovenia.

These rankings are the direct result of the last Sunday's competition at Inzai in Japan, where Schubert placed 4th ahead of Domen Škofic. The competition was won by Ondra who, after the hiccough in China, found his winning form that secured him the World Championship title at Gijón in Spain last month. The Czech climbed 4 holds higher than local athlete Sachi Amma and 6 holds higher than Škofic and Schubert (separated by countback). It's worth noting that Stefano Ghisolfi, the only Italian athlete in the competition and winner of the previous stage at Wujiang, failed to make it past 18th place (like Schubert and Ondra the previous week), proving once again how small the difference is between qualifying and failing to qualify for the Final.

In the women's event Jain Kim won convincingly, clinching the only top and beating the two Slovenian's, Mina Markovic and Maja Vidmar, 2nd and 3rd respectively. They beat Akiyo Noguchi who made best use of this home competition to take part in her first Lead World Cup this seasons, ahead of Magdalena Röck, Anak Verhoeven, Hélène Janicot and Yuka Kobayashi, 5th to 8th respectively.