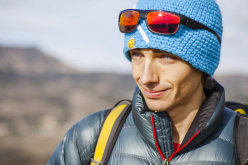 Jacopo Larcher 8b+ onsight at Montsant

While Italian climbers Gabriele Moroni and Silvio Reffo are now at Siurana, at Montsant in Spain Jacopo Larcher has onsighted his second 8b+, Les Elements.

As mentioned a few days ago, the Spanish crags are currently hustling and bustling with climbing business and the Italians are on top form. First and foremost Jacopo Larcher who after having redpointed Jungle Speed 9a at Siurana opted for a breath of fresh air at the conglomerate crag Montsant. On 25 December he warmed up quickly and decided to on-sight Els Elements, the "shortest" 8b+ at the crag. Short so to speak, and circa 20 minutes later he came up trumps and clipped the abseil chain of his second 8b+ onsight. "Really satisfying, it bodes well for the future" was Larcher's comment afterwards and he will remain in Spain for another week before returning home and "grabbing my ice axes."

In all likelihood Larcher will concentrate his efforts once again on Estado Critico, the 40m 9a that runs parallel to the famous La Rambla at Siurana. The 23-year-old from Bolzano is in excellent company: after their first stop at Oliana his fellow countrymen Gabriele Moroni and Silvio Reffo have now driven to Siurana to test themselves on this genre of routes. While Moroni has his sights set on the bouldery Jungle Speed, Reffo too has chosen Estado Critico and knowing this trio, some great news might well reach us before the year is over!