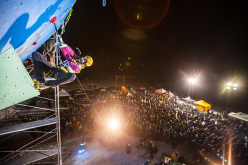 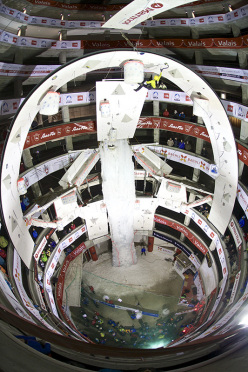 During the Ice Climbing World Cup at Saas Fee, Switzerland
Photo by UIAA

The dates and video introducing the Ice Climbing World Cup 2015 with stages scheduled in the USA, South Korea, Switzerland, Italy, France and Russia.

The new season of the Ice Climbing World Cup 2015 kicks off next weekend with the first competition at Bozeman, USA, during the famous ice climbing festival. After this North American stage the World Cup circuit gets into full swing with three stages in January: Cheongsong in South Korea, Saas-Fee in Switzerland and Rabenstein in Val Passiria, Italy. This Dolomites stage is a doubly important since it also serves as the biannual World Championship. At the start of February the circuit moves on to France, Champagny to be precise, while it rounds off with the grande finale in March at Kirov in Russia. Last year the Ice Climbing World Cup was won by the Russians Maxim Tomilov and Maria Tolokonina who beat Angelika Rainer from Italy and Park Heeyong, while Alexey Tomilov and Shin WoonSeon placed third overall.