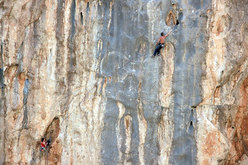 Christian Bindhammer and Damaris Knorr have repeated the multi-pitch Hotel Supramonte (8b) in the Gola di Gorroppu, Sardinia.

Christian Bindhammer and Damaris Knorr have made a fast repeat of the multi-pitch Hotel Supramonte (8b) in the Gola di Gorroppu, Sardinia.

Although the route has seen numerous repeats since it was established in 1998, no one to date has managed to on-sight the entire line: Christian set off with this in mind, but after onsighting up to the third (8b) pitch, was stopped by the fourth (8a+) pitch. He decided to check out the other pitches up to the „Hotel“, but in doing so though he slipped and injured his foot slightly.

Five rest days later the duo set off at 8.am and, fighting against rising temperatures, soon reached the crux fifth pitch. After falling once Christian pulled the ropes and led this pitch free, then continued up to reach the Hotel at 15.30, and topped out after 10 pitches after just 9 hours.


Hotel Supramonte – a brief history
Hotel Supramonte in Sardinia’s Gola di Gorroppu was first established by Rolando Larcher and Roberto Vigiani over a five day period in 1998 and climbed with one point of aid. Pietro dal PrÃ  freed the line in 2000, and in 2006 it received ist first female ascent at the hands of Martina Cufar.
Some climbers opt to spend the night in the Hotel niche, others prefer to climb the route in one day. Although the original line is eleven pitches long, many climbers choose not to climb the final 6b+ pitch.
Considered one of the most important and beautiful multi-pitches in the world, to date it has not yet received an on-sight ascent.