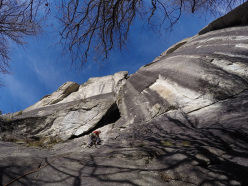 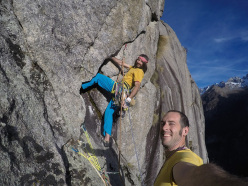 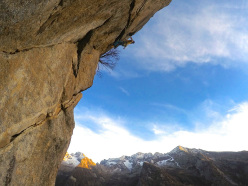 In 2014 Pietro Biasini, Daniele Bianchi and Mirko Masè established the first seven pitches of Here today gone tomorrow (X-, 215m) on Scoglio delle Metamorfosi in Val di Mello, Italy. In November 2015 Bianchi and Masé completed the climb in memory of their friend Pietro Biasini, who died in Norway in February 2015.

This whole thing started when I accompanied my friend Simone Pedeferri to Scoglio delle Metamorfosi: I had to help him clean an old line he'd equipped a few years ago and hadn't climbed yet. The route was Io non ho paura, which Simone subsequently freed last summer.

While we were climbing observing the Scoglio face from a different perspective, I noticed different shapes and forms I'd previously ignored. The sunlight, thanks to its changing height throughout the day (and in the different seasons) allowed me to notice details that were highlighted by a delicate play of shadows and light, bringing to the forefront tiny nuances hitherto imperceptible. Or perhaps perceptible in that moment only, simply because before we weren't ready.

At that time I noticed a logical sequence of slender cracks to our left. Filled with grass in places, they immediately attracted my attention also because I couldn't care less about Simone's route seeing that it was way out of my league. This was the spark that set the flame, and as my eyes followed the line upwards, the desire within me grew to give it a go. I shelved these thoughts momentarily, but that night at the bar I met Pietro "Pana" and Daniele, from Parma. After a couple of beers I suggested we try the route that I'd described to them with who knows how much enthusiasm.

On 26 October 2014 Pana, Dani and I reached the base of the face, armed with all the ironmongery imaginable (and perhaps even more), but without anything that could drill into the rock. We'd decided that the route had to be climbed in a trad style, that was the name of the game. Pietro set off, on-sighting the first pitch which fortunately ended on a comfortable sunny ledge where we spent the next few hours climbing pitch two, first Dani, then I. A third, easy pitch led us on a high to the end of day one, we'd already fathomed where our journey would continue.

For me that was a day I'll never forget. It was the last time I climbed with Pietro. Nicknamed Pana, a friend to everyone, he died that winter, leaving a huge void, but having given us the opportunity to get to know him.

Along came spring and Dani and I decided the time had come to return to the route. In April we completed the climb by forging the final three pitches, the last of which proved particularly challenging. The idea was to try and free it, but before this could happen we had to sort it out a bit, remove the grass from the cracks and clean the rock with a wire brush to make it climbable. Between summer and autumn we invested three days in this cleaning before attempting the individual pitches.

Facilitated by the incredible period of high pressure which in 2015 resulted in an extremely dry autumn and exceptional climbing conditions, the time finally came to try and free the route ground-up, placing all the gear as we went. In the morning of 16 November Dani and I walked up through Val di Mello; the valley was icy, still cast in shadow, deserted. We are surprised to see how dry the route was, even the second pitch which during our previous attempts had been damp and consequently testing. Anyways: excellent weather, not a cloud in the sky, warm sun, crisp air, cool rock and zero humidity. Practically perfect.

We knew we could free it. I set off, I knew the route well, knew exactly what I needed for each pitch, could remember every single move. The first pitch went smoothly, the second was pretty demanding, then the route offered some respite. Another two pitches led to the base of our nightmare. Up until then it had all gone well, now it was all or nothing. The last pitch is an overhanging jam crack, with an offwidth start that continues via narrow fist jams, often past sharks that bite your palms. Wearing gloves and taping up is mandatory if you want to protect your poor hands.

Adrenaline pumped through our veins as we both climbed this too pitch, breaching the overhang and reaching the peaceful Scoglio summit slabs. We'd done it: we'd managed to climb the entire route free, placing all the gear as we went. The valley now was all for us, filled with our joy which we wanted to enjoy all alone. Just us THREE.