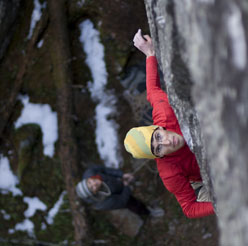 PORTFOLIO / gallery Portfolio: Hansjörg Auer and the knot at the end of the rope

Hansjörg Auer and the knot at the end of the rope

Hansjörg Auer reminds all how important it is to tie a knot into the end of the rope, even at the crag.

Yesterday we received an email from Hansjörg Auer, the young Austrian who shot to world attention with his extraordinary free solo of Via del Pesce on the Marmolada, Dolomites. This time he got in touch not to tell us about his latest adventure, rather to inform us about his recent misadventure at the crag which could have had far worse consequences.

This is what he wrote: "After having injured myself in June I was getting back into shape, not 100% but at the crag I was beginning to climb quite well. I had also gone back to the mountains, had revisited the Marmolada, but then back home it happened again: climbing at a crag one day I failed to tie a knot in the end of the rope (this simply shouldn't happen), my friend lowered me down from a 35m route and the moment he stretched out his hand to grab me the rope whizzed through the belay device and I fell 25m, tumbling down the steep rocks to the base of the wall... What was incredible was that I walked clear with only bruises: my head, feet, all the rest were fine - nothing was broken! After a night in hospital I was dismissed and went home. I'm not sure why I'm so lucky but I'm really grateful. Things could have been much worse."

The warning is clear, the procedure extremely simple. To avoid accidents which are increasingly becoming common place at the crags, where pitches are becoming longer and longer, make sure you've tied a knot into the other end of the rope before setting off. But above all remember that climbing is comprised of two elements, both of equal importance and responsibility: the leader and the second. Happy, and safe, climbing to all!