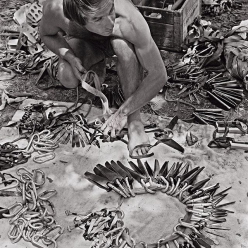 Yvon Chouinard in the famous photo taken Glen Denny, sorting out gear at Camp 4 in Yosemite, 1969.
Photo by Glen Denny

The video tribute to Glen Denny, the American climber and photographer who captured through his images the Golden Age of rock climbing in Yosemite National Park, by the American Alpine Club Legacy Series.

"In September 1958 I drove to Yosemite to learn to climb. At El Cap Meadow I ran into a traffic jam of people watching the first ascent of El Capitan. Through binoculars I could see tiny people inching up a magnificent wall. I instantly realised I had come to the right place." This is how the young Glen Denny began his lifelong love affair with Yosemite valley and, camera in hand, during the fervent 1960’s and 1970’s he chronicled the known as the Golden Age of Yosemite climbing.

After that first visit Denny soon became a proficient climber himself with numerous important ascents to his name, such as the first ascent of Astroman on Washington Column in 1959, the first ascent of West Face of Leaning Tower in 1961 and the third ascent of The Nose in 1963. It was during these climbs that he produced photographs considered timeless masterpieces of icons such as Jim Bridwell, Yvon Chouinard, Tom Frost, Warren Harding, Chuck Pratt, Royal Robbins and Layton Kor. His shots of life at Camp 4 document a vibrant era when Yosemite valley was the center of the rock-climbing universe. His life and contribution to climbing is celebrated in this short film by the American Alpine Club Legacy Series.