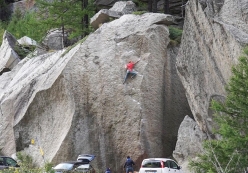 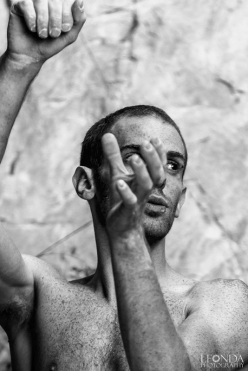 Interview with Italian climber Gabriele Moroni who on 02/09/2017 in Val Noasca (Valle dell’Orco, Italy) pulled off the first repeat of 29 dots, the difficult highball boulder problem freed in 2015 by Austria’s Bernd Zangerl.

Last Saturday 29-year-old Gabriele Moroni got up to his usual antics, repeating the difficult and tall highball "29 dots"’ in Val Noasca, Valle dell’Orco, Italy. Freed in 2015 by Bernd Zangerl, it was described by the first ascentionist as "the proudest, the hardest piece of rock I climbed in this style” and it comes as no surprise that Moroni pulled off a fast repeat. Of late the climber from Norvara has been searching not only for his physical limit but also testing his psychological barriers, confirmed by ascents such as Ambrosia - the quintessential highball at the Bishop Buttermilks, USA - and also the terrifying Rigatoni in the Orco Valley. The recent ascent of 29dots is likely to be the first repeat of this 8A+ and, as Moroni told planetmountain.com, it forms part of “one of the highest forms of expressions of my climbing."


I visited the Orco valley a dozen years ago to climb its big walls, but honestly at the time I didn’t even notice the line up this impressive boulder… In recent years however I returned to do some bouldering and had eyed a possible line, but since at the time I didn’t know much about highballing, or soloing, or whatever you want to call it, I reckoned it was a line that could be bolted. When the news came through that Bernd had climbed it as a highball and was rather shocked! A short while later I began to establish and repeat my first real highballs...

How did you feel when you saw it this year?
When you arrive by car and park below it, it’s fairly impressive. Having said that, most of the routes I've done in recent years are more or less the same height, or even shorter! But the landing here is completely flat, so it’s not particularly scary.

Did you ever plan to try it ground-up?
No, I never thought of trying it ground up. Partly because of its difficulty but above all for the rock quality. Good but not indestructible ...

So…
On day one I gave it a go because I was curious, I wanted to see if it might be a good project for September. It was very hot though and I couldn’t do all the moves on the crux at the start.

What happened the next day?
Saturday the weather was variable, with some drizzle but always cold and a stiff breeze. Just what you need for the small crimps on the first part of 29dots. I started the day with Andrea Zanone and Edoardo Bocchio Vega at Ceresole Reale by flashing a beautiful highball put up by Edo, The Totem, a nice 7B ideal for those who want to start doing some highballing where at some point falling off is no longer an option. Then we moved to Eldorado, a new sector above Ceresole Reale where the Orcoblocco bouldering meeting was taking place. In the early afternoon I went on my own down to Noasca, the area with the legendary Kosterlitz crack and several other problems put up by Bernd Zangerl, including 29dots.

And
As soon as I arrived I started to try the moves on toprope and immediately noticed that things felt great. After a couple of hours of work I had everything more or less under control, so I placed the pads and tried the first 3 or 4 meters on my own, to break the ice and get into the swing of things…

Would you have climbed it alone?
The idea of doing it on my own was certainly in the back of my mind, but I still needed to fully understand the last hard moves on the first section. And then, as if by magic, my three friends popped up, Edo, Andre and Stecca! I realized that the time had come to give it a shot.. Good vibes, good conditions and three friends ...

This may be a stupid question: how much did you risk? For example, can you climb 8A+ boulder problems blindfold?
In all honestly I don’t think I risked all that much. The hard part, i.e. what makes it 8A+, is in the first 6 meters. The landing is perfectly flat and a fall is OK therefore. The top section is much easier and definitely manageable. 29 dots is not the apex of my "highballer" career, I've done some other climbs that are psychologically more demanding, maybe lower, easier, but on my own or with bad landings where falling is not recommended. On routes of this sort you need to enter into a different dimension, before going for it you need to know you’re not going to fall despite the elevated difficulties. In my case also on 8A/8A+ which I can’t climbed with my eyes closed, but almost ...

What would have happened had it been a sport climb?
Had it been bolted I wouldn’t have complained… as I said before, most of the climbs I usually do, the ones that suit me, are about this height! having said that, I’m pleased a line such as this one has maintained its integrity. It’s always difficult to establish the boundary between bolting and not bolting lines such as this one. I too, in the past, bolted short lines which now, with my different approach, I wouldn’t bolt any more…. but that’s all part of the experience that has made me become the climber I am now.

Last question: in the past you’ve climbed some other great highball. We know you guard these ascents very jealously, and that there are some you’ve never talked much about. So what makes highballing so special?
Highballing is one of the highest forms of expressions of my climbing. I feel that in recent years it’s transforming into my specialty and, above all, a necessity. In the past all I had to do was pull hard on some crimps to feel satisfied, now I feel I need more. I need to feel other emotions, ones which are stronger and more difficult to deal with.

27.07.2015
Bernd Zangerl joins 29dots in Val Noasca
Austrian boulderer Bernd Zangerl​ has made the first ascent of 29 dots, describing the highball in Val Noasca - Valle dell'Orco, Italy, as "the proudest, the hardest piece of rock I climbed in this style."