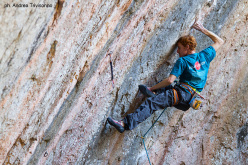 Yesterday at Siurana in Spain Gabriele Moroni and Silvio Reffo both sent their 9a routes: Jungle Speed the former, Estado Critico the latter.

No sooner have we crossed our fingers and they're already at the top of their routes: yesterday Italian sport climbers Gabriele Moroni and Silvio Reffo both managed to send their respective projects at Siurana. While Moroni sent the bouldery Jungle Speed in circa 10 attempts, Reffo raced his up the stamina fest Estado Critico on his 5th go. It's worth noting that both got close to redpointing the lines early on, demonstrating that this grade is almost too easy and that they might well be much more in store. We know that both have important projects at Oliana... perhaps we can keep our fingers crossed for a while after all!

To find out more check out nosiestaspaintrip.com