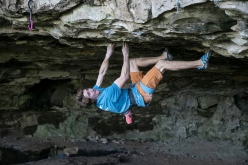 Akira, the famous sport climb established by Fred Rouhling in 1995, has finally been repeated for the first time by Sébastien Bouin and Lucien Martinez. According to the two young Frenchmen the route is a difficult 9a, and not 9b as suggested by Rouhling 25 years ago.

A quarter of a century after the first ascent of Akira, one of the most famous but also the most controversial sport climbs in the world, has finally been repeated. Not only once, but twice, by Sébastien Bouin and Lucien Martinez.

Established in 1995 by Fred Rouhling at Le Périgord in France, the route - a 12m roof climbed as a boulder problem followed by 8m section climbed with a rope - triggered heated controversy in the mid-nineties when Rouhling suggested the unprecedented grade 9b. At the time 9a had only just been established, 9a+ didn’t even exist and the arguments were that this hybrid route simply couldn’t be as hard as the Frenchman claimed or, worse still, Rouhling hadn’t climbed it.

Some light has now been shed on this mystery and one of the most controversial sport climbing chapters thanks to Lucien Martinez and Sébastien Bouin, as part of the Vintage Rock Tour in search of hardest routes in France of the 80’s and 90’s. Much to their own surprise the duo both managed to repeat this historic test, after which they suggested not 9b but a difficult 9a.

Rouhling was more than capable of climbing 9a back then and this downgrade indicates that he had indeed climbed the route back in the day, but simply made a mistake in suggesting a grade so far above the limit of that era. "Anyway this route is hard" commented Bouin "and quite unbelievable for the 90’s."

02.11.2020
Sébastien Bouin repeats Fred Rouhling’s Hugh at Eaux Claires, France’s first 9a
French climber Seb Bouin has made a rare ascent of Hugh at Les Eaux Claires, first ascended in 1993 by Fred Rouhling and famous for being the first 9a in France.