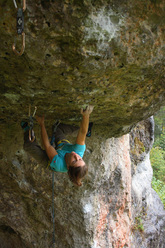 Sarah Seeger climbs Steinbock 8c in the Frankenjura, Markus Bock creates his hardest to date, The Man That Follows Hell 9a+, while Adam Ondra makes swift work of two other testpieces in Germany's premier climbing area.

A crisp autumn has facilitated important ascents in Germany's Frankenjura. Sarah Seeger kicked off the high-end action on Saturday 3 October with her redpoint of Steinbock, a steeply overhanging 22 move 8c at the Orakel first ascended by Markus Bock in August 2008. After redpointing Ronin (10+/11-) earlier this year, Steinbock is now Seeger's hardest route to date and contemporaneously is also the hardest route climbed by a woman in the Frankenjura.

A day after Seeger's success Markus Bock experienced "one of the happiest moments" in his climbing career when he freed The Man That Follows Hell at the aptly named Grüne Hölle. Bock's latest effort is in fact an old project originally bolted by Milan Sykora (thge man who envisioned the line of Action Directe) and a direct start to the existing Kawaschuwu (8c+). The straightened out version weighs in at 9a+ and the 30 year old described it as follows for the German climbing magazine Klettern: "16 moves - exactly as many as Action Directe 9a - with comparable climbing and steepness - yet the individual moves are significantly harder." Bock stuck the crux on his seventh try on 4 October of what is now, together with his 2006 testpiece Corona, the Frankenjura's hardest route.

Talking about Kawaschuwu - last weekend Adam Ondra repeated this route third go, a day after redpointing Pantera (9a) which he had first attempted in June. Ondra needed 4 days to climb this nth Bock creation, a record for the young Czech climber who no doubt will have "Follows Hell" high on his agenda.