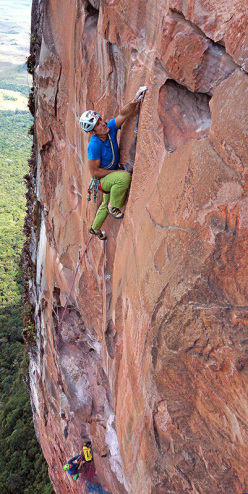 At the end of January and the start of February 2014 Rolando Larcher, Maurizio Oviglia and Luca Giupponi made the first ascent, and first free ascent, of Escalador Selvatico (7c+ max, 7a+ oblig, 630m) up the North Face of Akopan Tepui in Venezuela.

Those who still ask themselves about the greater meaning of climbing should perhaps remember that it is always intrinsically linked to adventure, to travels and discovery. Take, for example, the latest "mission" of Rolando Larcher, Maurizio Oviglia and Luca Giupponi to Venezuela. Destination Akopan Tepui, one of those enormous, fascinating peaks (Tepui means house of Gods) that rise straight out of the Amazon rainforest. A peak that had seen numerous climbers in the past including Glowacz, Albert, Heuber and Calderon who, in 2006, made the first ascent of "Fegefeuer", purgatory, as well as the small team comprised of John Arran, Anne Arran and Alfredo Rangél who in 2003 made the first ascent of "Pizza, Chocolate y Cerveza" (a year after "Jardinieros de Grandes Paretes" at the hands of Helmut Gargitter, Walter Obergolser, Toni Obojes, Pauli Trenkwalder, Ivan Calderón and Renato Botte). And then, in more recent times, there's the ascent of "Gravity Inversion", put up this January by the Americans Joel Unema, Eric Deschamps, Luis Cisneros and Blake McCord. Right between the routes "Gravity Inversion" and "Pizza, Chocolate y Cerveza" Larcher, Giupponi and Oviglia forged their "Escalador Selvatico", a beautiful and difficult 630m route with difficulties up to 7c+ (7a+ obligatory). A line which, Lacher confided, offers beautiful climbing, almost unexpectedly so at the outset. Of the 18 pitches, only a few required some "jungle" style climbing, while all the rest are quite simply fantastic. Add to this the fact that the face overhangs 50m... So according to Larcher (who has established new routes and climbed on almost all the world's big rock faces, except for the Antarctic) and his partners (who certainly are no less experienced) Acopan Tepui offers exceptional big wall climbing. At this point, you might say, nothing new... But as you can gather from Oviglia's report, there's more. Much more. There's the forest. The local Indios. A world, distant and unknown. A different rhythm we no longer know. And there are encounters, such as with legendary Venezuelian climber Ivan Calderòn. In short, there are all the ingredients that, probably, help comprehend the greater meaning of climbing.

As we left we hoped our style of first ascent, practically the opposite to the capsule style used by most who establish new big walls across the globe, would also work on Akopan Tepui in Venezuela. And yes, in the end, it worked, but only halfway! Helmut "Helli" Gargitter, an early pioneer of Akopan Tepui, had talked to Rolando about this beautiful mountain and its potential, and naturally we'd read all the reports about the previous expeditions that had left their mark on this rock face, including the most spoken about and spectacular climb of all, led by Stefan Glowacz and the late Kurt Albert.

Looking at their photos, and those of Nico Favresse with his unfailing mandolin sitting T-shirtless on his portaledge, I decided it wasn't really the place for me, sat as I was in the middle of the Mediterranean winter. But Rolando continued to insist that it was a hundred times better than going to Chile or Brazil. "Trust me, perfect weather, no mosquitoes and no snakes, it's all made up, you won't even notice you're at the Equator!" And so in the end he succeed in convincing Gippo and myself to join him, even if I like to believe (with a touch of pride) that he didn't really have too many other options had Luca or I declined...

After having driven along all roads suitable only for jeeps, and after an exhausting journey that took us, unscathed, through Caracas and one of the most dangerous roads in the world (no less than 1600 km in two days) thanks only to our Venezuelan driver and climber, the legendary Ivan Calderòn, we finally arrived at the small Santa Elena airport on the border with Brazil. Massive "Raulito", the pilot of the small Cessna plane, couldn't believe how much luggage we had. He was meant to fly us to the Indigenous village Yunek and exclaimed "With 300kg of luggage, plus you" - and him I'd like to add - "I'm not sure whether the plane will even take off! But we can always give it a go..." So, somewhat worried, we boarded the plane and felt it tilt sideways as the first wheel lifted off the ground, then the second and we finally took off. Yes, we hadn't taken a portaledge with us, but instead we had 350m of static ropes and everything we'd need to be completely autonomous for the next 20 days! And we'd also taken drills and bolts, because we didn't plan on climbing a route that was totally trad.

We landed at Yunek we immediately got on well with the local Pemòn Indians. While Raulito bid farewell and took off, elbow out of his cockpit window, we tried to explain to the village chief that we'd need 10 porters to help us carry our gear to the base of the mountain. No problem, kind Leonardo smiled back! We looked at each other questioningly, as there were only 4 men in the village and plenty of women and children. So who would carry the loads? Women work here too! the chief scolded us, while they smiled knowingly... As we set off, with the women (albeit with slightly reduced loads) shouldering our gear, we felt somewhat embarrassed. Children followed their mothers happily with small rucksacks. Will we be accused of child exploitation? Our concerns disappeared soon enough as we watched them casually wade through a river that we had difficulties crossing. Oh dear, are you absolutely certain that it's not infested with piranhas? The Indios women laughed, covering their lips with their hands...

We established Base Camp and remained with just one Indios, Julio, our guide who would show us how to get to the base of the face. The next three days - during which Julio continued to stun us with his constant machete hacking skills and strength - were spent searching in vain for a suitable place to start our route. Because of the tropical climate we were exhausted and dehydrated and it seemed as if there were more existing routes than we had originally reckoned with after having received all the topos from those we'd contacted. In the end the choice was inevitable: the large overhanging face which had - on close examination through a pair of binoculars - a red sling at half-height, probably left there by the Americans who'd recently put up a new route on this face. We'd start further to the left and try to tackle the overhangs head on. Rolly reckoned it would go, I knew he was bluffing completely, but all things said and done we've always been extremely lucky, so why not give it a go? The time had finally come to start climbing! We were fed up of wandering through the jungle hauling gear!

At first we seemed to make good progress. The beautiful, ultra overhanging rock surpassed all our expectations. However, after having climbed the first 8 pitches we'd already fixed most of our ropes and things began to get problematic. What seemed like easy white slabs just before the ledge at half-height turned out to be totally smooth and vertical. Rolly was forced to pull all the tricks out of the hat to climb that section, while Luca and I did our very best to contribute and continue upwards. At the end of our 4th day I somehow managed to traverse across a wet streak. It started to rain but I chose to ignore it since the face is so overhanging I wouldn't get wet, just like during all the other downpours we'd experienced the previous days. But when an immense waterfall thundered down onto the jungle below, via a 600m drop, I started to get worried. The water was 50m out from me, but I thought perhaps I'd better descend nevertheless... I was just one, somewhat "jungle", pitch from the ledge, but I left everything there and quickly abseiled down to my climbing partners. We retreated down the fixed ropes as night fell, beneath a total downpour that showed no signs of letting up. 40m off the deck, and by now in total darkness, Rolly stopped short on a terrace "I'm not descending any further" he exclaimed "you've gotta be crazy if you want to pass underneath that waterfall. The track leads right past it!" We waited for an hour but it didn't stop and, like it or not, we'd have to cross that section. We reached our camp drenched to the bones, and the gentle stream had transformed into a raging river. Wading through it proved a real thriller as we risked being swept away...

A rest day was needed, to analyse our progress and recharge our batteries. Julio had abandoned us, who knows where he was, and since the satellite phone had broken on day two we were all alone, days away from civilisation. We couldn't communicate with anyone. But this was the adventure we were after, right? What's more, life on the rock face and in the jungle had transformed us into rather "wild" climbers. Would we be able to give our route a name that would reflect this? We decided to change tactics: perhaps there was a tiny terrace on that ledge above our highpoint. What we'd do was haul up all our gear and then stay on the face, until we topped out... The following three days were marked by long hours of battling, followed by never-ending waits while Rolly finally discovered the magic sequence of holds and pockets through the overhangs, on nothing less than pitch 16. A memorable 7c+, with long runouts above Friends... But there were also other unforgettable moments, such as when we shared the tiny terrace, in bed at 18, falling asleep gazing at the stars and watching the satellites as they orbited through the night sky, every now and the the sound of a hummingbird's wings as it flew close by. Luca got to climb the last jungle pitch to the summit: a hairy tarantula as big as my hand crawled past me as Luca struggled against the (endemic) vegetation of all shapes and sizes that might hide all sorts of dangers... Four metres below the summit he shouted down "Guys, I can't go on any further, it's a right mess up here!" "You're joking, right?" Rolando shouted back before adding "Reach the summit, it's an order!" At 14 all three of us stood on top of Tepui, a world within another world, impossible to put into words.

Two days later, during an intense 14 hours on the face, my two partners made the route's first redpoint ascent, climbing the finishing pitches in the light of their headtorches. I, after having been injured during the abseil two days beforehand and therrefore full of painkillers, had to make do with sitting behind the lens, hanging off the jumars (as if I hadn't done enough already) and climbing ten pitches with them, some up to 7b without falling, just to remember what it's like to climb and have fun... We abseiled off through the night, for a change... What an abseil! And to think that at the time I believed Hotel Supramonte was overhanging!