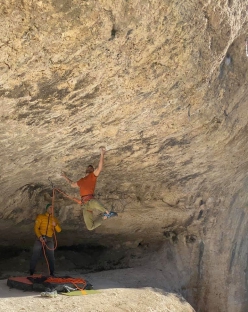 Elias Iagnemma making the first ascent of a 20-year-old project at Grotti, Ultimo Tango a Zagarolo. The 24-year-old has suggested 9a/+, making it the hardest route at the crag and in Central Italy
Photo by Luca Volpe 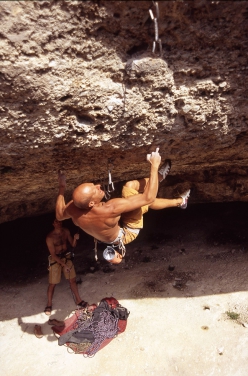 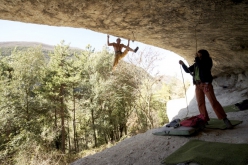 At the Italian crag Grotti, Elias Iagnemma has made the first ascent of an old project made famous by local climber Alessandro Lamberti, Ultimo Tango in Zagarolo. Iagnemma suggests the grade 9a/+

It is highly likely that anyone remotely interested in training for climbing knows the book Jollypower and the photo that adorns the cover: Alessandro Lamberti fighting his way through a steep roof, holding two painful monodoigts with his foot practically at the same height of his hand.

That route bolted by Alfredo Smargiassi exactly 20 years ago is located at Grotti, the famous crag located circa 90 minutes NE of Rome, and was attempted for a decade by "Jolly" who actually got extremely close to making the first ascent, but for various reasons the route always eluded him. In 2017 the Roman mountain guide posted a photo on his Instagram account stating that he’d be happy if the new generation of climbers gave it a go and now, two decades after Ultimo Tango in Zagarolo was envisioned, the route has finally been freed by the next in line: 24-year-old Elias Iagnemma who has put forward the rather cautious grade of 9a/+.

After some sporadic attempts last year when the route was wet, the Italian national champ boulderer started some serious attempts in October, almost immediately after establishing the 9a/+ route Ten at Vado di Sole and after having repeated Voortrekker at Frosilone.

“The moves coming out of the route always thrashed my skin and after three attempts per day I always had to rest for more than a week and wait for my skin to improve" Iagnemma told planetmountain.com, adding that "This route is hard, also because it bites. It’s beautiful, but it doesn't ever give you the opportunity to try it properly."

Iagnemma considers Ultimo Tango the most difficult line at Grotti and in Central Italy, but nevertheless slightly easier than his Ten. We will see.

A post shared by Alessandro Jolly Lamberti (@jollypowertraining) on Jan 7, 2020 at 12:31am PST