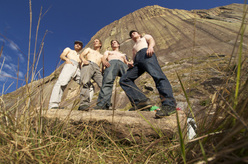 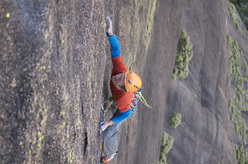 Lukas Binder climbing an 8b pitch on Dreams of Youth, Tsaranoro, Madagascar
Photo by Team Allgäu

Remember Tough Enough, the highly technical 8c multipitch up the East Face of Karambony in Tsaranoro Valley, Madagascar, attempted by some of the world's elite and finally freed by Adam Ondra last October? Well it looks like this masterpiece has now got a rather difficult neighbour, established this August by Martin Schindele, Lukas Binder, Philipp Hofmann and Tobias Baur.

Lukas Binder kindly sent us the following brief description: "We'd dreamt about travelling to Madagascar and establishing a new route for four years, ever since hearing reports by Daniel Gebel (who established Tough Enough) and Toni Lamprecht. Our dream came true this August: our Dreams of Youth follows a logical line up a shallow water groove, it established it ground-up over 8 days and we used fixed ropes on circa 2/3 of the route. The distance between the bolts is pretty normal except for the easier pitches which can get quite run-out. None of us climb harder than 8b+ and although we have provided an estimate for the grades, we didn't have time to redpoint the harder pitches. We hope it's all climbable and look forward to a strong team going there to send it ;-)