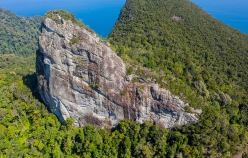 Mystery Wall, Dragon Horns on the tropical Tioman Island in Malaysia. The granite massif has one of the tallest walls in South-East Asia.
Photo by David Kaszlikowski 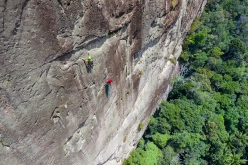 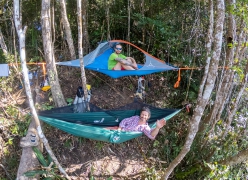 Eliza Kubarska provides the latest updates about the climbing on the elusive Mystery Wall situated in the Dragon Horns massif on Tioman Island in Malaysia.

The Dragon Horns granite massif is located on the tropical Tioman Island in Malaysia and has one of the tallest walls in South-East Asia. Its exploration began as late as 2000, but today it offers a number of well-protected multi-pitch climbs up to 300m in height, ready to be repeated.

In 2016 Jonas Wallin from Sweden and David Kaszlikowski from Poland - responsible for most multi-pitch routes on the island - cut a trail through the jungle to the base of virgin Mumbar cliff, a mountain north of the Dragon Towers. Here the team established their Fever Dreams (7c, 250m).

In April 2019, Wallin/Kaszlikowski joined forces again to climb another virgin wall - a previously untouched and "unseen" pinnacle facing Tioman’s inland valley. Although the profile of the project is visible from the Dragon Horns South Tower, the main wall is surrounded by jungle that stretches out for kilometres and was a much debated mystery among visiting climbers, hence its name Mystery Wall.

Kaszlikowski explained: "I wasn't sure if the wall I imagined even existed… until a huge landslide erased a stretch of the jungle in 2014, enabling access into the neighbouring valley. I went on a recce with my drone but due to weak battery all I got was a brief glimpse of my treasure."

It took them a few days just to find and cut a trail to the top of virgin pinnacle. This, at present, is the easiest approach to the mountain. The team reached the summit on 17 April, but it took another 11 days of constant effort to establish Blood, Sweat and Fear (7b+, 6b oblig.,130m, 6c+, 6c, 7a+, 7b+, 6c+, 7a+, 6c) The route was redpointed on 28 April and separate abseil stations for 60m rope were installed.

"The wall is clean and compact with potential for at least another 5 or 6 major multi-pitch routes, however, the lower section of the wall is often blank! We hope to encourage other climbers to participate in this adventure, there are currently 14 multi-pitch routes in the area, but many more lines are still waiting for their first ascent."

In July 2019 another team made its way up Mumbar Cliff; Mike Soldner, Tam Khairudin Haja and Stuart (surname unknown) climbed a new trad line on Mumbar’s west face called Yoga Boy (5c, 220m, bolted abseils). It is only second route on this 1km wide wall. On 16 July Soldner and Kai Voges started a much longer trad project, leading the first 3 pitches and reporting about a line that is potentially up to 400m high.

The drone photos in the gallery are probably the first-ever photos of Mystery Wall.

23.05.2016
Malaysia / new multi-pitch climb on Tioman island by Jonas Wallin and David Kaszlikowski
In April 2016 Jonas Wallin from Sweden and David Kaszlikowski from Poland established Fever Dreams (7c max, 9 pitches) on the previously unclimbed Mumbar cliff in the Dragon Horns massif on Tioman island, Malaysia. To access the mountain team had to find and cut new trail in the jungle.