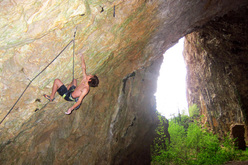 Halupca 1979, the 9a route at Ospo in Slovenia, has been repeated by Domen Škofic.

That the Slovenians are extremely talented climbers, is no secret. Recent confirmation comes from the depths of the enormous cave at Ospo where two days ago Domen Škofic redpointed Halupca 1979, the route bolted by Klemen Becan and then freed by Matej Sova in 2008 and which the 18 year-old has now sent in a mere 6 attempts.

Škofic - a name we're certain to hear more about in the near future - comes from Radovljica, a small village in northwest Slovenia. In 2011 he was crowned Youth Campion of his category and he has sent boulder problems up to 8A and succeeded on two 8b+ on-sights (Kale borroka at Siurana and Active discharge at Ospo). Furthermore, a fortnight ago he made the first ascent Revolucija 8c+ after having broken a crux hold in that massive cave just a as tone's throw from the village Ospo.

On this last route, Škofic told planetmountain these interesting details: "I did the first ascent of Revolucija after I broke off the 30 kg stalactite and the route is significantly harder now. The hardest part used to be in the lower section and then every move became easier and easier all the way to the top, but now the hardest section starts a few meters before the anchor. I'm not entirely sure about the grade but now that I've sent Halupca and if I compare the difficulties, then I think the grade might be correct. I hope somebody repeats it soon and provides another opinion."