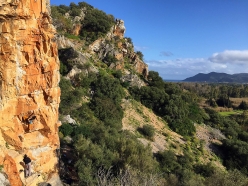 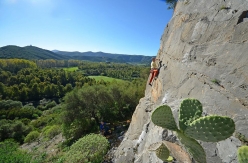 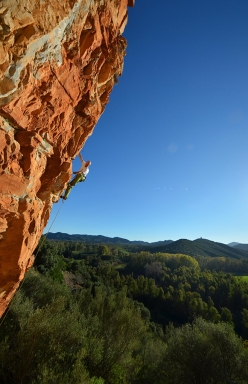 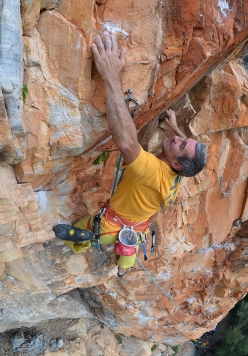 The area called ​​Quirra, in the southeastern part of Sardinia, is known to be one of the least rainy in all of Italy. Furthermore, it is also one of the hottest, so much so that nearby Muravera is famous for its oranges. Well-known to Sardinian climbers for almost twenty years, climbing at Quirra is recommended in the winter months only therefore.

The crag, which goes by the name of "Passaggio per Chitur", is popular with high-end climbers. With its steep overhangs it is reminiscent of Spanish crags, and it hosts the island’s first 8c, Una più del Diavolo. Originally graded 8c+, as it happens it was repeated and downgraded by two Spanish climbers, Dani Andrada and Pedro Pons.

Although there are easer sectors, the crag has never become over popular with the masses, understandably so as it’s too difficult. This is why in early 2017 Simone Sarti and I decided to bolt an old abandoned sector close to the road that seemed to offer some easier climbs.

The local climbing gym Palestra V10 at Quartu held a bouldering competition to help raise funds to rebolt the old routes and add some new ones. Appetite comes with eating, so the proverb goes, and as a result I spent more than the allocated budget and bolted everything possible, even the easiest lines, in order to create a sector suitable for beginners.

As usual I did the "dirty" work, cleaning the rock and bolting the routes, while Simone helped me by generally lending a hand, freeing the hardest climbs, thinking of route names and checking the grades of the climbs (which still await confirmation). I would also like to thank Fabio Erriu who gave me a hand cleaning the base of the crag, even less "fun" than drilling but nevertheless something that needs doing... The sector was completed in May but since the climbing season had ended, I thought I’d talk about it now.

A helmet is recommended, for the second and in particular at the lefthand side of the sector. Some blocks not one the actual routes were glued to make them more stable, but due care and attention is needed!

Access: From Muravera or Tortolì take the SS125 and exit the main road at Quirra. Take the old SS125 and turn off towards Murtas Beach, then immediately left onto the dirt road. Drive down this, cross the river on a concrete bridge (impossible after heavy rainfall to cross by car). Park on the left shortly afterwards below the cliff, which is reached in 5 minutes.

23.06.2017
Monte Limbara and the new trad climbing in Sardinia
The latest trad climbs at Monte Limbara on the North of Sardinia, first ascended by Maurizio Oviglia and Filippo Manca. Oviglia provides the report.