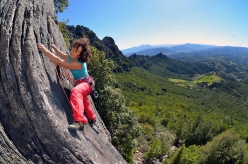 Cecilia Marchi climbing Faradda (6b+) at Coa ‘e Littu. The Gennargentu can be seen in the background
Photo by Maurizio Oviglia 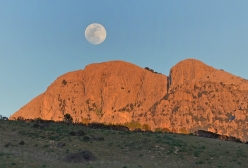 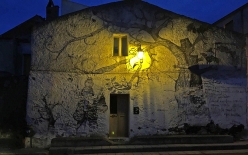 A historic murales at Lula
Photo by Maurizio Oviglia 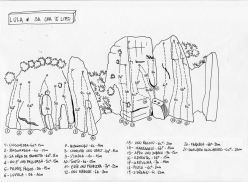 Sport climbing at Lula, the new crag in Sardinia

Lula is a small village in Sardinia’s center, in the Barbagia region located on the western slopes of Mount Albo, a long white limestone mountain (hence the name) which lies between Gallura and Supramonte. Known for its mines and murals, this area has been attracting outdoor tourism, not only those interested in the popular walks in the Monte Albo massif.

Mount Albo hosts a series of trad climbs and the initial exploration dates back to the early eighties. The sheer potential for rock climbing in this corner of Sardinia is simply awesome but, until now, climbers and tourists who docked at Olbia have always preferred to drive a few kilometers further south and continue on to Cala Gonone and Oliena.

The town of Lula ha now informed us that there’s a sports crag with about twenty (for now) well-equipped routes, recently revolted and ideal for beginners, too.