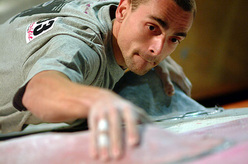 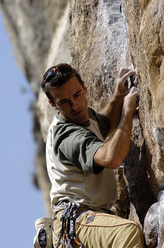 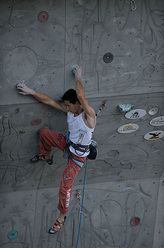 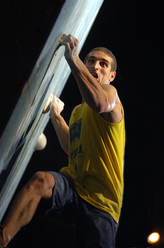 Ever wondered who won the first-ever official UIAA Sport Climbing World Championship? Most would hedge their bets on François Legrand and they wouldn't be disasppointed as for three events in a row - from 1991 to 1995 - the Frenchman proved simply unbeatable. But, tell the truth, would you have remembered that silent Swiss powerhouse Susi Good dominated the first two events? And did you realise that despite its popularity, the first bouldering World Championship took place a mere 10 years ago? Won by Italian Mauro Calibani in 2001 and by his teammate Christian Core two years later. And did you realise that Dani Andrada, best known for his 9a testpieces and his vital role in developing sport climbing in Spain, raced to success to won Speed World Championship in Paris in 1997?

In the run-up to the IFSC Climbing World Championship 2011 scheduled for mid July in the Italian town Arco we thought it interesting to take a step back into competition climbing history and examine who has left their mark. A glance at the table below reveals who won gold, silver and bronze and what is striking is that - so far - no athlete has managed to bridge the gap and win at least two disciplines, despite valiant efforts by the likes of Sandine Levet, Akiyo Noguchi and Tomas Olesky to name but three.

Notable for their lack of World Championship victory are undisputable all-time greats sucha s Lynn Hill (she only competed in the first event in Frankfurt and placed 5th), Alexandre Chabot and more recently Kilian Fischhuber, the man who more than anyone else has dominated the Bouldering World Cup series. But as everyone knows, the World Championship is a one-off event, where a mistake costs dearer than in the World Cup series and can only be corrected two years down the line. This is why for most athletes Arco 2011 is the absolute top of their competition agenda, and their preparations have been in full swing for quite a while. Their dream is to add their names to the list of winners below.