Olhava, one of the most important crags in Finland
Photo by Ville Kurru 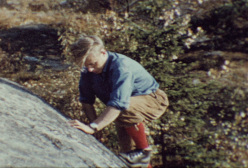 Climbing in Finland - a short history

Tommy Vänskä, co-director of the film Kylmää kiveä, retraces the history of rock climbing in Finland.

We admit it, rock climbing in Finland isn't our expertise. But Tommy Vänskä certainly knows a thing or two. Along with Ville Kurru, Vänskä, has directed Kylmää kiveä (Cold Stone), the film which covers the entire history of Finnish climbing from its beginnings in the early '50's, including the man who started it all, Matti A. Jokinen, to present day including the newest generation stars such as the boulderer Nalle Hukkataival. Since the trailer is great but not much is available online about the county's climbing history, Vänskä kindly provided the following interesting outline.

ROCK CLIMBING IN FINLAND - A SHORT HISTORY by Tommy Vänskä

Climbing in Finland can be traced back to one man, Matti A. Jokinen, whose ascent of the Matterhorn in 1954 marks the beginning of Finnish climbing. When he returned home the small crags of Taivaskallio, just off his backyard in Helsinki, became the first Finnish climbing venue.

For him and the small group of peers he recruited, climbing in Finland was strictly seen as training for the Alps which were visited as often as possible. Matti was the leading Finnish climber throughout his career, with first ascents in the Dolomites, such as Via Finlandia in Cortina. He was, however, forced to stop climbing at the end of the 1960s due to a back injury. Perhaps not unrelated to this, climbing in Finland started waning at the same time, leaving only a few devotees to climb on the few crags that had been discovered.

In the mid 1970's a new crag, Olhava, was found, which was in a class of its own and remains one of the most important spots to this day. Olhava became the catalyst for several changes of paradigm: first, free climbing was introduced and this soon became the prevailing style. Then, at the beginning of the 1980s, climbing in Finland started being seen as an end in itself, as opposed to merely training for the real thing. Although climbing at this point was clearly more popular than ever, it remained an obscure activity known by few and practised by even fewer.

Since rock climbing outdoors in Finland is impossible in winter, i.e. during a good year from November through March, the appearance of the first indoor climbing venue in 1989 is a real milestone in Finnish climbing history. Holds were drilled into the vertical spray concrete walls of this combined bomb and sports center to form, amongst other things, a traverse of around 150 meters in length. The next season climbing standards were raised by a whole grade, and in five years reached 8a+. The maximum before indoor training had been 7b and this grade pushing was entirely due to the work of one climber, Henrik Suihkonen, and all the ground breaking routes were at the same crag, Nummi, discovered in 1989.

The 1990's were dominated by sport climbing. Although the number of new crags was high compared to three decades earlier, and domestic ascents were as valued as any others (if not more; Finland has a long tradition of shy grading!), the relatively low number of existing routes meant that aficionados trained on domestic granite with the main objective being the limestone crags in southern Europe. Modern indoor walls began popping up and competitions were held, but it wasn't until the new millennium that a true renaissance occurred.

The game-changer was the realisation that Finnish forests harbour quite a few boulders for those who can be bothered to make the search. Within a few years the number of areas and established problems exploded and having visited all the famous international areas, the boulderers knew that in terms of quality, Finnish bouldering was on a par with other more famous areas. For the first time, a Finnish climber could spend the entire season at home and not climb the same old routes, but find and climb new lines all the time!

It was in this fertile ground that young men such as Nalle Hukkataival grew up. Today climbing in Finland is, if not mainstream, then very close to it. A number of successful indoor bouldering and sport climbing walls have been established, introducing a new generation to the activity; the first generation for whom climbing is easily available. But also the first generation not to have learnt the craft from experienced elders in the old-fashioned manner, and thus largely ignorant of the history of the activity. How this hitherto unimaginable popularity will change the nature of Finnish climbing, if at all, remains to be seen. These are interesting times!