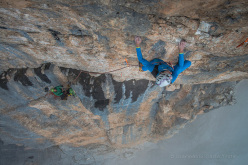 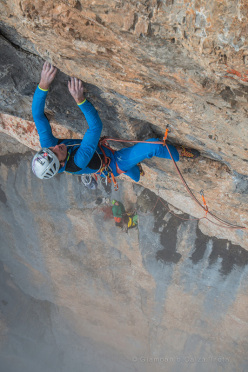 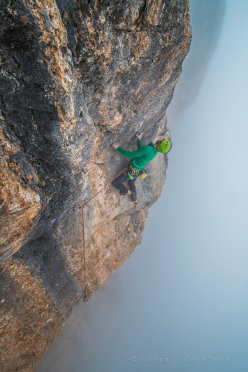 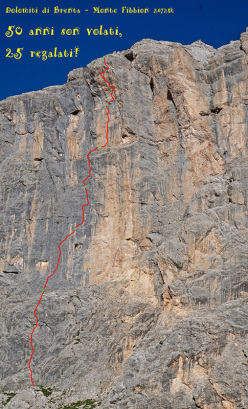 50 years flown by, 25 years a gift! The name of my new route is a riddle, unusual and subjective, kindly agreed to by my climbing partners. An easy riddle, the first half being obvious and almost pathetic, the second half is slightly more complicated and probably solvable only by those who’ve known me for a while. 50 years is the milestone I celebrated this beautiful summer, but 50 also represents the meters I fell, 25 years ago at the Gola di Toblino. My lived my first 25 years normally, the second as an unexpected gift after having miraculously survived the ground-fall. I wanted to remember this anniversary and, since it’s my passion, what better than to put up a new route in the wildest, most remote part of the Brenta Dolomites?

Once again the northern part of the Brenta offered a splendid and solid limestone wall, Mount Fibbion. A compact shield that leads upwards towards four overhanging pillars, first climbed in 1993 by Claudio Kerschbaumer and Donata Fiamozzi via their Supercrack.

The start of this new route was special because I was joined by my son Alessandro who was curious to find out more about this dimension of climbing. He accompanied Herman and myself, hauling his third of the the gear during the 2 hour approach before watching us establish the first pitches. The weather was superb, the ambient just as stunning, the rock awesome, what more could you ask for!

We hoped to complete the route on our second go and we set off motivated, once again in a team of three, but this time veteran Gippo (Luca Giupponi, ed) took Alex’s place. Three more pitches still needed to be climbed, two fairly reasonable that would have led us to the last pitch, a superbly overhanging sheet of rock. Herman quickly climbed his pitch, Luca resolved his in equally brilliant style, finding a huge ledge to belay on, right at the base of the 40° overhang. The last pitch was mine and I got just the thought of it got me going!

I’d have to deal with plenty of question marks, but isn’t it these uncertainties that we search for in our adventures, what motivates us to explore something new? As it happens, it was this unknown that gave the route its character, that has made it original. At the same time I was fairly at ease, I knew that if I didn’t find the hold, I’d be able to escape right, beyond the arete.

I set off fully psyched, but right at the start a difficult boulder crux threatened to ruin my day. After several attempts and falls I finally figured out the right sequence and continued my upwards exploration, full of hope. After two exciting hours a series of beautiful and powerful moves led to the lip of the overhang and the end of the difficulties. I then completed the pitch up an easy slab and we then returned euphorically down into the valley, enjoying the idea of the future redpoint, somewhere in the region of 8b we believed.

Thanks to this wonderful summer we quickly teamed up again and, much to our own surprise, managed to free all the pitches, including the last, to finish off this project. The only tiny disappointment I’ve got it that the last pitch isn’t 8b as I’d hoped: this would have equalled what Danilo Bonvecchio and I achieved 21 years ago, namely the first 8b established ground-up in the Brenta, pitch 2 of Mastro Geppetto on Tose in Val d’Ambiez (probably the first Italian ground-up 8b) But what remains is an exciting and beautiful pitch which, were it to be less remote, would prove popular quickly become polished.

Two anecdotes about this experience:

At the start of June I walked up to the foot of Fibbion for a reconnaissance trip. After having checked out the start and disturbed thirty chamois, I set off towards Sella del Montoz to find out where the top of the route would be. When I reached this I noticed, to the right and against the sun, the unmistakable shape of a bear. A mountain ridge is perhaps an unusual place to see a bear, but I remember my father telling me that ten years ago, in exactly the same spot, he’d encountered a mother bear with her two cubs. The shape was quite far away and after taking some photos I looked more carefully through my binoculars and realized that it wasn’t moving at all, eventhough I could see light between its legs... It had to be a rock and, given the size, a pretty big one! Later on I went to see it with my own eyes… I recommend you have a look at the portfolio!

Secondly, halfway up the face we discovered the entrance to a cave and on the day of our red point we tried to explore it. A stiff, cool breeze comes from within, meaning that its deep and probably has another exit. The narrow cave extends horizontally, the sides are extremely rough and after 30 meters the tunnel is blocked by a boulder, but it’s clear that it continues. I imagine it’s a great outing for adventurous cavers.

I’d like to thank my climbing partners for their friendship and the carefree days we’ve spent together. And also Trota (Paolo Calzà) for his patience and willingness to come along and take photos.