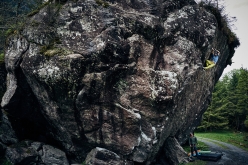 Bernd Zangerl climbing his Into the Sun in Murgtal, Switzerland
Photo by Ray Demski 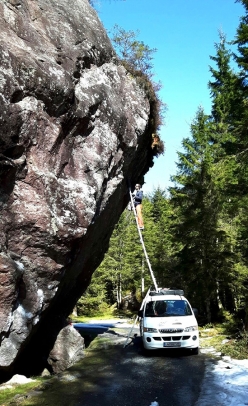 Bernd Zangerl observing the line of Into the Sun in Murgtal, Switzerland
Photo by Ray Demski

Bernd Zangerl climbs Into the Sun in Murgtal, Switzerland

The video of Austrian climber Bernd Zangerl who, 489 days after a serious injury, has managed to make the first free ascent of Into the Sun in Murgtal, Switzerland. Graded 8c+, this route is one of the hardest trad climbs in the world.

While trying a boulder problem at Cresciano in Switzerland in 2015, Austrian climber Bernd Zangerl landed badly on his back and immediately realised that the fall he had just taken was different from all his previous tumbles during the last 20 years of climbing. A pain, initially insidious then unsettlingly severe, led to an MRI that confirmed he had damaged the fifth and sixth cervical vertebrae.

Doctors were not optimistic, nevertheless two months later Zangerl started training, albeit with discouraging results: he had lost all his strength in his right hand and despite all his efforts, he did get any stronger. "I did everything that science told me, but with poor results" said Zangerl, "When it comes to nerve problems and healing processes, it seems that science has a long way to go." Instead of giving in he listened to himself and in August 2016 departed for India "I needed a break from all the specialists and theories."

In his Shangri La Zangerl slowly regained his form - in November 2016 he finally managed to hold his bodyweight for 6 seconds again - then with renewed joy and energy, he returned to Europe and started working a line on a boulder in Switzerland’s Murgtal in. 17 meters high and 20 meters long, this has two distinct 8A+ boulder cruxes that lead to a large sloper and am often damp crack, where four friends can be placed 9 meters off the deck before continuing to the top. 489 days after his fall Zangerl succeeded in making the first free ascent. Into the Sun is graded 8c +, as such it checks in as one of the hardest trad climbs in the world but, far more importantly, it marks an important comeback for the 38-year-old.

27.07.2015
Bernd Zangerl joins 29dots in Val Noasca
Austrian boulderer Bernd Zangerl​ has made the first ascent of 29 dots, describing the highball in Val Noasca - Valle dell'Orco, Italy, as "the proudest, the hardest piece of rock I climbed in this style." 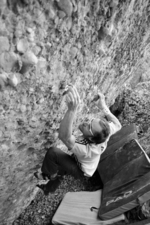 07.04.2009
Bernd Zangerl Chironico bouldering fest
On 17 March Bernd Zangerl carried out the first repeat of "From Dirt Grows The Flowers", the Fb8c problem first climbed by Dave Graham in 2005 at Chironico, Switzerland.