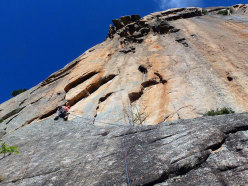 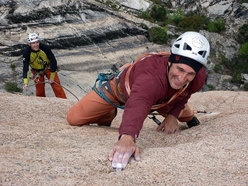 At the start of May 2012 in Corsica's Bavella massif the Italians Rolando Larcher and Maurizio Oviglia made the first ascent of Vecchia Felpa on Punta U Peru (190m, 7c max /RS2/I) while Luca Giupponi and Nicola Sartori made the firts ascent of Tafunata Galattica up the Contrafforti di Punta A Muvra (185m, 7b+ max 1 section FB7B/RS2/I). The route topo, report, team spirit and the fascinating Bavella by Maurizio Oviglia.

There are some places in this world which, despite being close to home, seem like they're locked away in a jewel case, impermeable to the outside and immune to time which inexorably passes. The Bavella up in Corsica is an example of one of these. At the end of the day it is nothing more than a small valley, a series of granite towers, at a relatively modest altitude. You can't even call them mountains. Places like this, in our Alps, can be found by the dozen... yet Bavella has something special, something out of the ordinary, difficult to lay your finger on. And the more you talk about it, the more it remains unknown. Perhaps it's because of this that ever since the first exploration period and then the difficult routes of the '80's, during which the first ascentionists did their best to hide the paths (complicated and adventurous in their own right)... that nowadays this area has not witnessed the tourist boom one might have imagined. Ever since climbers from Marseille established dozens and dozens of routes based on the Chamonix model (in truth a version somewhat more palisir and at times debatable even) one expected an invasion of climbers and the consecration of a new Yosemite valley in the Mediterranean, which is what Bavella really is. But no! Bavedda, as the Corsicans call it, has remained unaltered and maintains its wild and inhospitable heart. And apart from the known climbs, it remains in large part uncharted, with much still to be explored and a story which still needs writing.

As everyone knows, having unfinished projects is a good excuse to return and finish something off. And our partners know this, too, with their expression as they bid good-bye which translates into "Don't think I don't know what you're up to". We then met up, four of us this time, enjoying that air of comradeship which we, well over 40-year-olds, simply cannot do without. It may seem strange, but even if we're only on an island just off the coast of Italy, it feels like we're on an expedition. And even if we spend the nights in a one-star refuge, invaded by camming devices, ropes and all sorts of climbing gear - it doesn't seem strange to place toothpaste and brush into the battery charger of our drill. It's a bit like rediscovering the spirit of base camps on any old mountain in the Greater Ranges.

The Mediterranean "monsoon" at the start of May cut our trip in half but in the end, with the usual climbing frenzy - in truth close to becoming a disease - we managed to establish two routes, one for each climbing party. The overhangs up Punta U Peru became a sort of last resort for Rolando Larcher and myself, seeing that we failed to make significant headway up our old project due to a series of problems. But a handful of exciting pitches, including a 7c pitch protected with Friends and bolts up the fiery-red granite, "rekindled" our motivation supremely. And we probably even beat our own speed record: just a day and a hald to forge and free the 6 pitch route. Which meant that we even had a day to spare, during fantastic weather!

Doing what tourists do was out of the question and so the choice was between repeating a beautiful route perhaps up Punta Lunarda and "nip at the heels" of our friends Nicola Sartori and Luca Giupponi who were attempting to free their new route... the decision came easy. And proved excellent, seeing that we experienced a memorable day out, fun, with friends and, seeing that it was the last day of a week's first ascending, great form. When you climb well you always have dun and when you manage to climb two great weeks in such a short week, bad weather included, then you can only be thankful for the fact that, somewhere on earth, there is a place like Bavella. Where you can return whenever you feel like it... Because there's always a half-finished project somewhere!